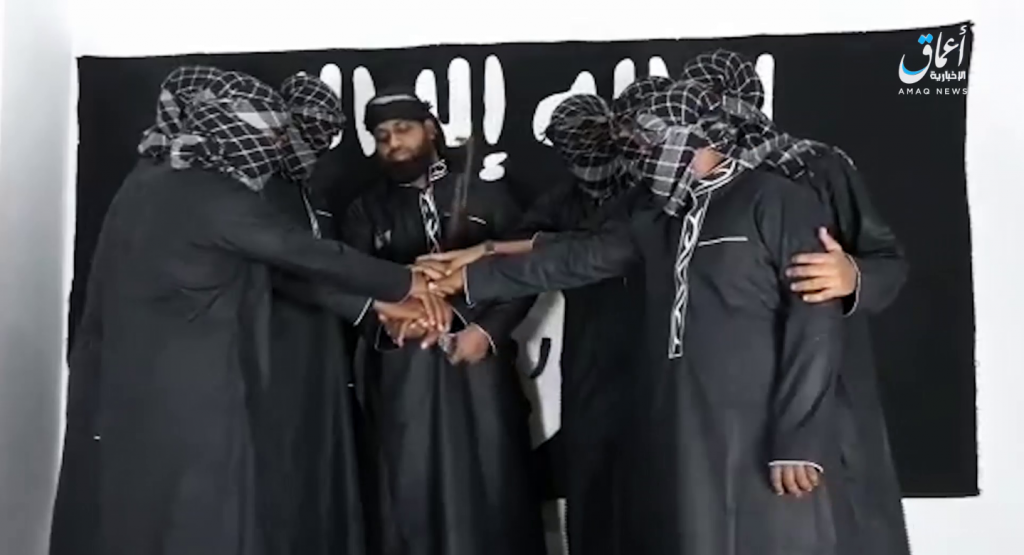 The Islamic State released a video of the terrorists responsible for the Easter Sunday bombings in Sri Lanka. Led by Zahran Hashim (center), they swore allegiance to Baghdadi.

Earlier today, the Islamic State’s Amaq News Agency released a video of eight jihadists in Sri Lankaswearing their allegiance (bayat) to Abu Bakr al-Baghdadi. The men, who join hands as they declare fealty to the so-called caliph, are reportedly the same terrorists responsible for the devastating bombings in Sri Lanka on Easter Sunday. More than 300 people perished, making it one of the deadliest terrorist operations in the post-9/11 era.

Amaq has released similar videos since 2016, often after smaller-scale attacks. The footage is undoubtedly intended to underscore the connection between the perpetrators and the Islamic State mother organization. The strength of those ties needs to be evaluated using multiple sources of evidence and intelligence, not just the videos. Such an evaluation is currently underway with respect to the terrorists in Sri Lanka.

Nevertheless, the videos demonstrate that the terrorists have at least a digital tie to the Islamic State’s global network. The jihadists seen in the footage from Sri Lanka rehearse a familiar script, declaring Baghdadi to be “Emir ul-Mu’minin,” or the “Emir of the Faithful,” in front of the group’s typical banner.

This ritual is not limited to videos released after successful terrorist attacks, but even, in some cases, after the terrorists’ plots fizzled.

This was the case earlier this week, when Amaq posted a short video of the four jihadists who attacked a police station or state security building in Zulfi, Saudi Arabia. The details are murky, as the Saudi government is hardly a beacon of transparency. But it appears the four were killed and did little damage. Still, Amaq was eager to celebrate their fealty to Baghdadi.

The jihadists in Sri Lanka and Saudi Arabia recorded their allegiance videos in advance of their operations. Either these jihadists, or someone close to them, contacted the Islamic State’s online network, such that Amaq could leverage their footage after the fact.

Like the recent footage recorded in Saudi Arabia and Sri Lanka, the videos listed below featured jihadists who recorded their bayat (oath of allegiance) to Abu Bakr al-Baghdadi prior to their attacks. The clips were then released online by the Islamic State’s propaganda arms, either via Amaq News Agency or Furat Media.

The list presented here is an updated version of an analysis previously published by FDD’s Long War Journal.

On July 18, 2016, an Afghan teenage refugee bordered a train in the German city of Würzburg and hacked at passengers. The teenager, identified as Muhammad Riyad, brandished a knife in an Amaq video as he swore his loyalty to Baghdadi. (The Grozny attacker repeated this scene.)

On July 24, 2016, a veteran jihadist from Syria blew himself up, perhaps accidentally, outside of a music festival in Ansbach, Germany. More than a dozen people were injured. The bomber, identified as Mohammad Daleel, rehearsed the oath of allegiance to Baghdadi in an Amaq video released online two days after his attack.

On July 26, 2016, a pair of jihadists assaulted a church during morning mass in Normandy, France, killing an elderly priest and taking several people hostage before being gunned down by police. Amaq’s video showed the two performing the oath of allegiance to Baghdadi shortly before carrying out the murder.

On Aug. 17, 2016, two young jihadists, identified as Uthman Mardalov and Salim Israilov, assaulted Russian policemen in Balashikha, which is east of Moscow. The pair swore allegiance to Baghdadi in footage that was disseminated by Amaq.

On Dec. 19, 2016, Anis Amri, a Tunisian man, drove a large lorry into a crowded Christmas market in Berlin. Twelve people were killed in his vehicular assault. Days later, Amri was subsequently killed during a shootout with Italian police in Milan. Amaq released a video of Amri swearing allegiance to Baghdadi, and US officials discovered that he had ties to Islamic State operatives in Italy.

On Aug. 19, 2017, a young man went on a stabbing rampage in the Russian city of Surgat, wounding eight people. The terrorist was shot and killed by authorities. Two days later, on Aug. 21, Furat media (another Islamic State propaganda arm) released a short video featuring the jihadist responsible for the Surgat assault. The masked man, identified as Masa’ud al-Surghuti, swore allegiance to Abu Bakr al Baghdadi, whom he addressed as the “Emir of the Believers” and the caliph. Al-Surghuti called upon supporters to lash out with the simplest weapons they can find, including household tools.

On Mar. 20, a lone assailant stabbed and slashed at police in Grozny, the capital of Chechnya. Shortly afterwards, Amaq News released a video of the Baghdadi loyalist brandishing a knife as he sat in front of a small Islamic State flag on the wall behind him. He addressed the “brothers” who are on “social networks” and implored them to lash out. He told fellow believers that they should kidnap or kill “all apostates” wherever they may live.

On May 12, a young man named Khamzat Azimov, who was born in Chechnya, knifed several people near an opera house in Paris. One person was killed and several others wounded before Azimov was shot and killed by police. Amaq again quickly claimed responsibility for the stabbings, employing the same language used in previous statements by stating that he “carried out the operation in response to the call to target coalition nations.” The following day, May 13, Amaq released a video purportedly showing the Paris terrorist swearing allegiance to Baghdadi. The masked man is presumably Azimov.

On July 29, five young jihadists used their vehicle to strike foreign cyclists in Tajikistan. They then stabbed or lunged at the surviving tourists with their knives. Two Americans were killed in the assault. Two days later, on July 31, Amaq News released a video purportedly showing the five assailants pledging their fealty to Baghdadi before the killings.

On Aug. 21, 2018, Amaq released a video showing four young males, including a boy and three other children or teenagers, who were responsible for terrorist attacks in Chechnya the day before. The youths reportedly assaulted police in Grozny, Shali and the village of Mesker-Yurt.

Trump’s Bad Deal with the Taliban