With President Obama poised to visit Saudi Arabia at the end of this month, America’s relations are strained with the Kingdom. The Saudis do not trust America’s nuclear deal with Iran, and Washington worries that the Kingdom’s jihadist clients in Syria could exacerbate terrorism worldwide.

But underneath the immediate security challenges receiving top billing on the President’s trip, there is another looming counterterrorism problem: Saudi Arabia’s ongoing sponsorship of religious hatred in its public education system. And in what might be seen as a disservice to American national interests, the State Department appears to be withholding a government-commissioned textbooks study on the subject.

In 2011, Foggy Bottom signed a contract with a local non-profit called the International Center for Religion and Diplomacy (ICRD) to conduct a comprehensive study on Saudi Arabia’s government-published textbooks, which are widely distributed both inside the country and abroad. However, when the results of this study were ready for release in 2012, U.S. government officials decided not to publish its findings. Nor did the Department release this study in 2013, despite issuing a similar but controversial study equating the narratives found in textbooks used by Israelis and Palestinians. 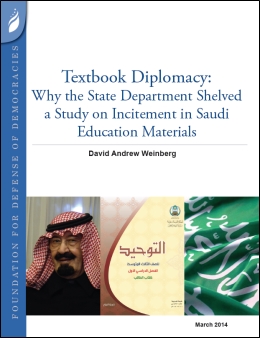 ICRD’s leadership insists that their study was withheld from the public because it showed the Saudis are making progress on textbook revisions. Thus, the State Department did not want to upset further progress by highlighting a few remaining areas of disagreement.

However, current and former officials contest this characterization, asserting that ICRD’s study was withheld because of how bad it makes the Saudis look. Passages continue to dehumanize Jews and Christians, promote the murder of perceived deviants such as homosexuals, and sanction violence against Muslims who do not follow the Wahhabi brand of Islam that is sponsored by the Saudi state.