The U.S. Senate has 54 bipartisan co-sponsors for new legislation that would impose sanctions on Iran if it cheats on its obligations under the Joint Plan of Action (JPA) reached on November 24, 2013, in Geneva between the P5+1 and the Islamic Republic. The legislation responds to a concern that the sanctions relief under the JPA, valued by the Obama administration at about $7 billion, may not accurately reflect the overall boost to Iran’s economy stemming from a de-escalation of sanctions, changing market psychology, and expectations of more economic relief to come. The concern is that, if Iran’s economy further stabilizes, Iran may have less incentive to negotiate a comprehensive nuclear deal that stops an Iranian nuclear weapons breakout.

Iran’s economy is showing signs of recovery after years of sanctions, due in no small part to the recent sanctions relief offered in Geneva, changing market psychology, and a perception that the Obama administration may no longer be committed to ratcheting up the economic pressure on Iran.

Recent economic indicators suggest that even before the Geneva interim agreement comes into effect, Iran’s economy is now on a more positive trajectory compared to the dismal conditions of 2012 and 2013 when tough US and EU financial and energy sanctions threatened to precipitate a balance-of-payments and financial crisis. 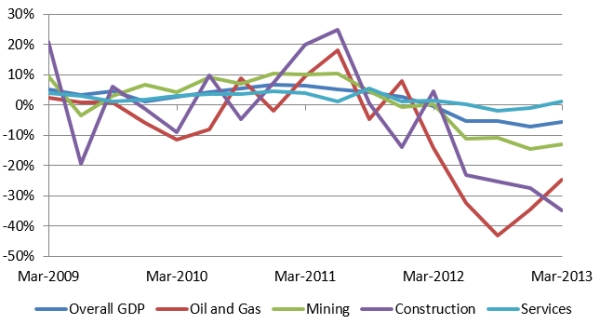 Annual inflation in Iran has moderated since mid 2013, as the effects of the 2012 rial depreciation and economic uncertainty already have been incorporated into Iranian expectations. We estimate consumer prices (as calculated by the Central Bank) will drop to 18-20% in 2014, compared to official estimates of around 40% in 2013. Inflation reduction supports Iranian purchasing power and reflects both changing market fundamentals as well as stronger economic policy-making (fiscal and Central Bank) since the election of Iranian President Hassan Rouhani. 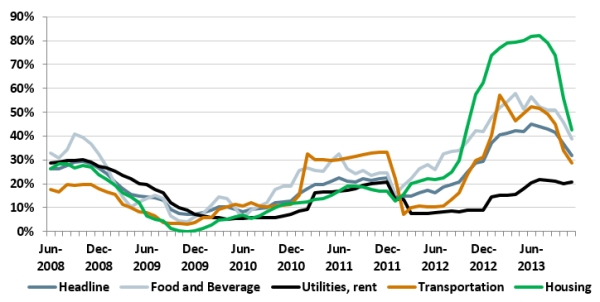 Iran is also on track to have a moderate trade and even a slight account surplus in 2014. Restrictions on access to foreign capital and weaker purchasing power have reduced imports, but non-crude oil exports, including fuel oil and condensates permitted under loopholes in U.S. sanctions laws, remained near the high levels of 2012.  In 2014, the value of imports, including auto parts, will grow as Iran gains access to cash and restrictions on key sectors are reduced under the JPA. For now, exports should still outpace this import growth.

Oil production and exports have stabilized at around 2.5 million barrels per day and 1.2 million barrels per day, respectively, after experiencing sharp drops through 2012 and 2013. While oil revenues are collecting in restricted escrow accounts available for only bilateral trade with a handful of Iranian oil buyers, the recent “gas-for-gold” scheme between Turkey and Iran is a good example of how Iran may be able to gain increased access to these funds beyond the $4.2 billion in frozen oil funds to be released under the JPA.

It’s also worth noting that according to some estimates, even without any further relief, Iran will save $4.5-$5 billion in oil revenues over the next six months as a result of the suspension of mandated reductions in oil purchases under the JPA . On top of that, key sectors of the Iranian economy such as auto and petrochemicals are already showing signs of increased economic activity, from a very low base, which will only accelerate as the JPA sanctions relief for these sectors is implemented fully.

In fact, although the Iranian economy remains close to recession, in the absence of a new shock, the Iranian economy should continue to stabilize, improving sentiment and attracting investment. An oil price shock from new sanctions that leads to another bout of rial depreciation could reignite such boom and bust pressures, hitting domestic demand and household income. More fiscal restraint or monetary tightening would dampen inflation and could lead to some months of deflationary pressure (negative price growth).

But overall, Iran’s economy is showing signs of recovery after years of sanctions, due in no small part to the recent sanctions relief offered in Geneva, changing market psychology, and a perception that the Obama administration may no longer be committed to ratcheting up the economic pressure on Iran.

Mark Dubowitz is executive director of the Foundation for Defense of Democracies. Rachel Ziemba is the director of emerging markets at Roubini Global Economics. This analysis is the seventh in a series from FDD’s Iran Sanctions Project’s ongoing assessment of sanctions relief on Iran’s economy. Previous reports include “The Costs for Iran of Walking Away from Nuclear Negotiations,” “The Real Value of Auto Sanctions Relief to Iran,” “The Geneva Joint Plan of Action and Iran’s Petrochemical Sector,” “The Dollar Value of the Proposed Sanctions Relief at Geneva,” “Iran’s Golden Loophole,”(co-authored with Roubini Global Economics), and “When Will Iran Run Out of Money?”(co-authored with Roubini Global Economics).