The Free Syrian Army last week released forty seven Iranian citizens and their Syrian interpreter in exchange for 2,130 prisoners held by the Syrian government. The exchange of hostages was facilitated through the good offices of the Turkish charity IHH (which was behind the flotilla that prompted clashes with Israeli commandos in 2011).  Several sources now claim that IRGC commanders were among the released hostages. 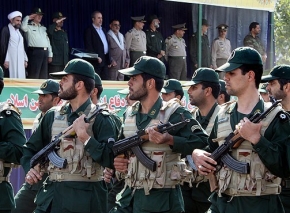 The state-controlled Iranian media did not mention the professional background or affiliation of the released. But, as it turns out, nine of them are active duty IRGC members. The list indeed includes: Brigadier General Abedin Khorram, West Azerbaijan IRGC commander; Colonel Taleb Rahimi, Naqadeh IRGC commander; Colonel Mohammad-Taqi Safari, Ganaveh IRGC commander; and Hojjat al-Eslam Karim Hossein-Khani, former representative of the Supreme Leader to the Oroumiyeh IRGC, and current head of the Clerics and Theological Students Basij in West Azerbaijan province.

The presence of active duty IRGC commanders among the freed hostages proves that, despite the emphatic denials of the the Islamic Republic, Iran is involved in the ongoing efforts to assist Bashar al-Assad’s brutal repression of the uprising in Syria. However, getting caught in a lie is the least of the Islamic Republic’s concerns. This affair has shattered the myth of the invincibility of the the IRGC. In their battle against peaceful and unarmed demonstrators in the streets of Iran in 2009, the IRGC was ruthlessly efficient. However, facing armed resistance and irregular warfare in Syria, the IRGC appears to be flailing.

Ali Alfoneh is a Senior Fellow at Foundation for Defense of Democracies.