Somalia’s Ministry of Information stated that Yare, also known as Abdullahi Nadir, was killed in a joint operation with “international security partners in Haramka village in Middle Jubba region.” According to the Somali government, Yare was acting as the head of Shabaab’s da’wah, or proselytizing, department at the time of his death.

The Somali government also noted that Yare was a close ally of both Ahmad Abdi Godane (a.k.a Mukhtar Abu Zubeyr), Shabaab’s first emir, and its current emir, Abu Udaidah Ahmad Umar. Yare was also reportedly a co-founder of Shabaab, which emerged as the youth wing of the former Islamic Courts Union (ICU) around 2005.

Abdullahi Nadir, a top leader of #Alshabab terrorists, wanted by Somali government for long time has been killed in operation conducted by Somali National Army and international security partners in Haramka village in Middle Jubba region, on 01-10-2022.#Somalia https://t.co/yJsfQL6Wts

U.S. Africa Command (AFRICOM) confirmed that it launched an airstrike on Oct. 1 “near Jilib.” Haramka, where Yare was killed, is approximately 50 miles from Jilib.

“The command’s initial assessment is that the strike killed a Shabaab leader and that no civilians were injured or killed,” AFRICOM noted in its press release that announced the strike. Shabaab is al Qaeda’s branch in East Africa. 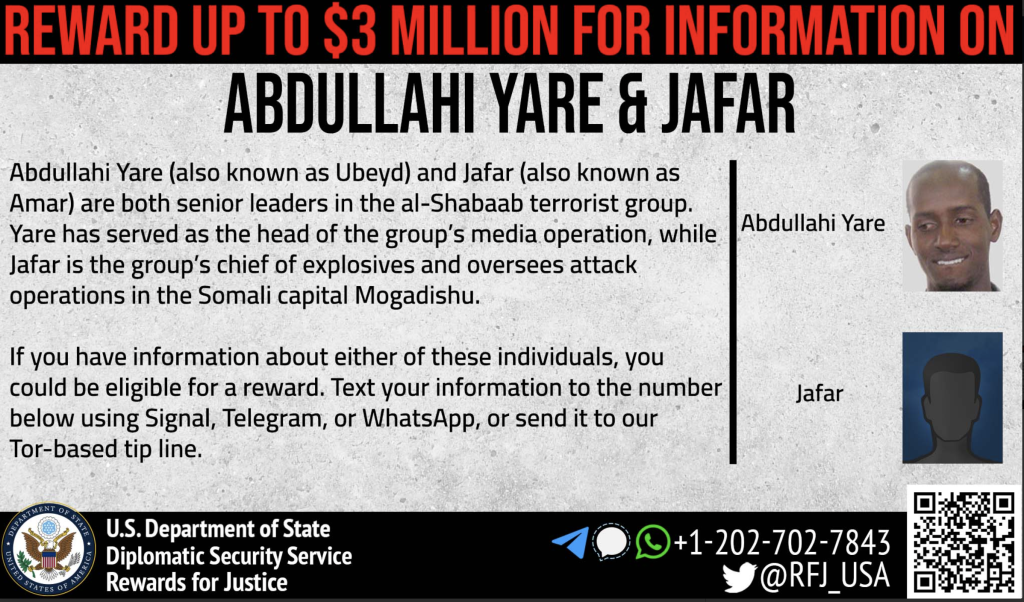 The U.S. State Department’s Rewards for Justice program offered a $3 million reward for information leading to Yare’s capture and conviction in February 2022. Rewards for Justice noted that Yare, who is also known as Abdullahi Yarisow and Ubeyd, “plays a prominent religious role within Shabaab” and he “previously … served as Shabaab’s head of media.”

Shabaab has not yet commented on Yare’s reported death. Earlier this year, Ethiopia claimed it killed two other senior leaders of Shabaab, Fu’ad Mohamad Khalaf and Abdulaziz Abu Musab. However, the al Qaeda branch quickly disproved these allegations with photo or visual evidence from both leaders.

Yare is the first top tier Shabaab leader reported killed in U.S. counterterrorism operations in Somalia since Aug. 25, 2020, when the U.S. killed Abdulqadir Commandos. AFRICOM launched 19 other strikes since it killed Commandos, but the targets, with the exception of Yare, were a mix of low-level Shabaab fighters, explosive experts, and military compounds.

A majority of the strikes are what AFRICOM describes as “defensive,” meaning they were launched to support Somali forces as they were being attacked by Shabaab.

According to data compiled by FDD’s Long War Journal, the United States has launched at least 236 airstrikes killing at least 1069 people in Somalia since 2007. The United States maintains that the vast majority of those killed were affiliated with Shabaab.

The U.S. military continues to describe Shabaab as a significant threat to U.S. security. AFRICOM described Shabaab as “the largest and most kinetically active al-Qaeda network in the world and has proved both its will and capability to attack U.S. forces and threaten U.S. security interests.”

The reported killing of Yare comes as Shabaab faces severe military operations against it across central Somalia. Earlier today, the group launched a series of three suicide bombings in the city of Beledweyne as retaliation for the operations.

Despite some setbacks in recent years, Shabaab continues to be one of al Qaeda’s most effective branches. It maintains significant control over much of southern Somalia and retains the ability to strike in Mogadishu, Kenya, where it also controls territory, and against heavily fortified bases in both Somalia and Kenya.

Note: the spelling of “Shabaab” has been changed to remain consistent throughout the article.

Bill Roggio is a Senior Fellow at the Foundation for Defense of Democracies and the Editor of The Long War Journal. Caleb Weiss is a research analyst at FDD’s Long War Journal and a senior analyst at the Bridgeway Foundation, where he focuses on the spread of the Islamic State in Central Africa. Follow Bill on Twitter @billroggio. FDD is a Washington, DC-based, nonpartisan research institute focusing on national security and foreign policy.