President Hassan Rouhani presented his cabinet to the Iranian parliament on August 4. His team is composed of one cleric, ten technocrats, three former members of the Islamic Revolutionary Guards Corps (IRGC), and four Ministry of Intelligence and National Security (MOIS) veterans, one of whom is a cleric by training.

As illustrated by the graph below, the strong technocratic presence in Rouhani’s proposed cabinet follows a general trend since the founding of the Islamic Republic in 1979. A relatively strong MOIS presence, however, is unprecedented. So is the sharp drop in IRGC presence. This shift could be a sign of increased struggle for power between the strongest security arms of the regime.

Meanwhile, most of the governments in the history of the Islamic Republic have had a significant IRGC component, which reached its peak during Ahmadinejad’s two consecutive terms in office. Rouhani, by contrast, has effectively purged the IRGC from the executive branch.

Despite their weakening, the IRGC is not likely to remain inactive. The Guards are already mobilizing their supporters in parliament against several cabinet picks. Bizhan Namdar Zangeneh, who is Rouhani’s replacement for former IRGC Commander Rostam Qassemi in the Petroleum Ministry, will undoubtedly be a target of parliamentary criticism. More dangerously, should Rouhani’s engagement with the United States bear fruit, the IRGC and its proxies abroad could attempt to derail the process by perpetrating violent acts against United States vessels in the Persian Gulf or other acts of terrorism through the Quds Force, the lethal external arm of the IRGC. 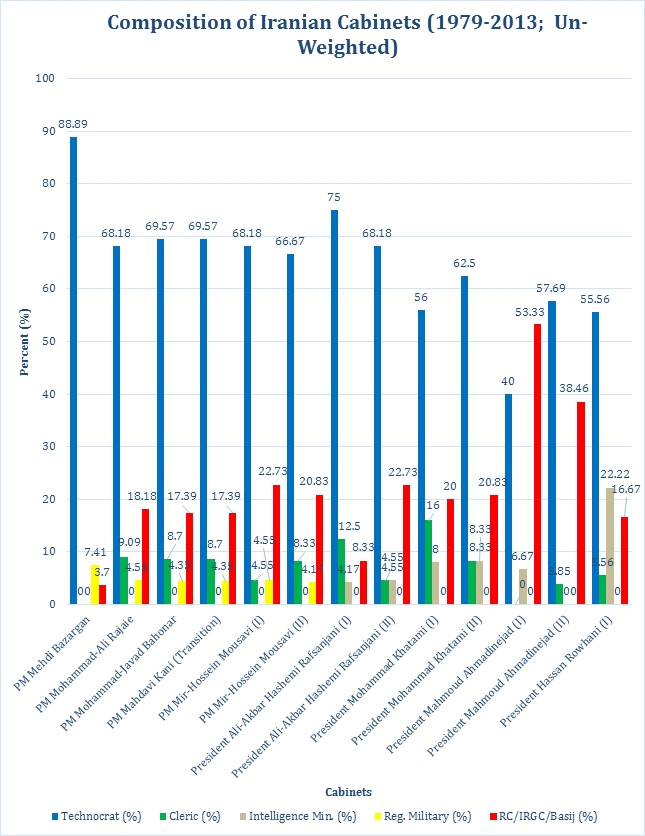 Ali Alfoneh is a senior fellow at Foundation for Defense of Democracies.

The author wishes to thank Behnam Ben Taleblu for his assistance with the graphic and the data analysis. Behnam is an Iran Research Analyst at Foundation for Defense of Democracies.