The Ukrainian Crisis and the Northern Distribution Network

The Ukrainian Crisis and the Northern Distribution Network

The U.S. Treasury Department levied more sanctions last week against key Russian officials close to President Putin, as well as Bank Rossiya. The Russian Federation replied by sanctioning U.S. politicians and foreign policy staff in the Obama administration. The Russian sanctions are largely symbolic, unless Senators plan to vacation in Sochi sometime soon. Russia does, however, possess a potential threat to the United States: it can play spoiler in Afghanistan.

The Northern Distribution Network (NDN), which extends in part from the Baltic nations of Latvia, Estonia, and Lithuania through Russia and on to Russian-allied countries in Central Asia before reaching Afghanistan, has brought in 52% of coalition supplies to Afghanistan in recent years (of that, 40% of the supplies are bound for American troops). Since 2009, the NDN has brought in over 2 million tons of non-lethal equipment through Baltic ports alone. Much of the network relies on rail and truck transportation through Russia. 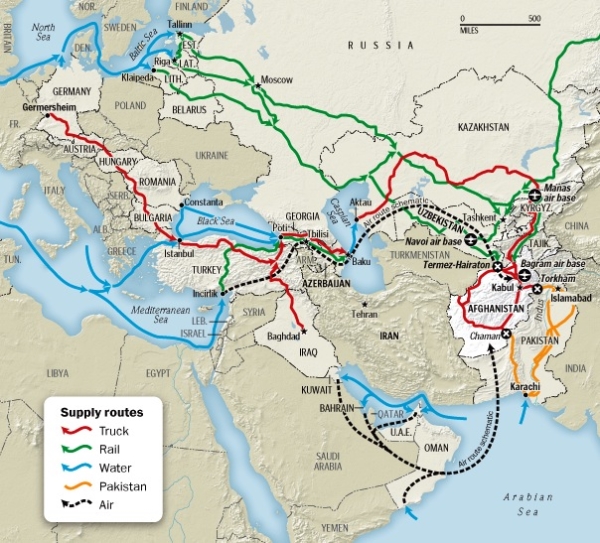 With the U.S. winding down its military presence in Afghanistan, it will still need this distribution network the rest of the year. Ultimately, some supplies will also need to be shipped back through these same routes. Further complicating post-2014 plans, the prospects for basing drones in Central Asian countries allied with Russia could be diminished.

In testimony on March 11, Air Force General Paul Selva noted that, “If the Russians were to take action to constrain our access to the Russian segments of the Northern Distribution Network, we have other options to move that cargo in and out of Afghanistan.” These options include Georgia and Azerbaijan, according to Selva.

Russian President Vladimir Putin in the past has favored the U.S. presence in Afghanistan, largely because Putin views it as a means to keep Russia’s southern border safe. In 2012 Putin stated, “We need to help them [U.S. and coalition forces]. Let them fight. … This is in Russia’s national interests.”  Putin last week reiterated the importance of cooperation with NATO on Afghanistan, saying “We need to strengthen Afghanistan’s government.”

However, as the situation between the West and Russia escalates, Putin may recalibrate. Should he deprive the U.S. of the NDN, he could challenge U.S. national security interests in Southeast Asia through the end of 2014.