Iraq has freed Musa Ali Daduq, the senior Hezbollah commander who was tasked by Iran's Islamic Revolutionary Guards Corps-Qods Force (IRGC-QF) to mold Shia terror groups into a Hezbollah-like entity. Daqduq was involved in the murder of five US soldiers in 2007. The US government transferred Daqduq to Iraqi custody in December 2011.

Daqduq was freed by Iraqi authorities last night and transferred to Lebanon, his lawyer told Reuters.

“There was no reason for his detention. Last night the decision was made to release him. He is out now and arrived in Beirut two hours ago,” Daqduq's lawyer told Reuters. “There are no charges against him in Iraq. His detention was political, not legal.”

Daqduq's release from Iraqi custody has been foreshadowed for months. In May, an Iraqi court ordered him to be released from custody, but Daqduq remained in prison while his case was appealed. In June, the US requested that Iraq extradite Daqduq so he could be tried in an American federal court. In August, an Iraqi court blocked his extradition to the US.

When the US transferred Daqduq to Iraqi custody last December, White House National Security Council spokesman Tommy Vietor said that Iraqi officials assured the US they would prosecute Daqduq.

At the time of Daqduq's release from US custody, American officials said that they feared the Iraqi government would be pressured by Iran and Shia political parties to free him outright. The US Department of Justice had planned to prosecute Daqduq in a US court, but Republican Senators opposed the transfer of the terrorist to US soil for prosecution. Some wanted Daqduq to be tried by a military court at Guantanamo Bay, but the Obama administration has refused to allow the transfer of terrorists to the prison and instead has sought to close it. 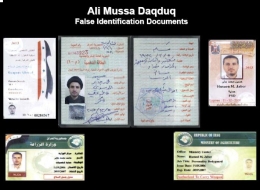 Daqduq is perhaps the most dangerous of the Shia terror commanders captured by US forces in Iraq since 2003. He has a pedigree with Lebanese Hezbollah, Iran's proxy militia and terror group that is based in Lebanon. At the time of his capture in March 2007, he was a 24-year veteran of Hezbollah. He has commanded both a Hezbollah special operations unit and the security detail of Hezbollah leader Hassan Nasrallah.

In 2005, Hezbollah's leadership directed Daqduq to travel to Iran and partner with Qods Force, Iran's elite special operations group tasked with spreading the Iranian theocracy to neighboring countries, to train Iraqi Shia terror groups, the US military said in a briefing in July 2007 after Daqduq's capture. The US seized documents that outlined Daqduq's role in supporting the Shia terror groups, which are collectively called the Special Groups by the US military. The Special Groups include the Mahdi Army, the League of the Righteous (Asaib al Haq, a Mahdi Army faction), and the Hezbollah Brigades.

In May 2006, Daqduq traveled with Yussef Hashim, the chief of Lebanese Hezbollah's operations in Iraq, to Tehran to meet with the commander and the deputy commander of the Iranian Qods Force Special External Operations branch. Daqduq made four trips into Iraq in 2006, where he personally observed Special Groups operations.

Upon his return to Iran, Daqduq was tasked to organize the Special Groups “in ways that mirrored how Hezbollah was organized in Lebanon,” Brigadier General Keven Bergner said in the July 2007 briefing. Daqduq began to train Iraqis inside Iran to carry out terror attacks in their home country. Groups of 20 to 60 recruits were trained in the use of Explosively Formed Penetrators (EFPs), mortars, rockets, and sniper rifles, and instructed on how to conduct intelligence and kidnapping operations.

“These Special Groups are militia extremists, funded, trained and armed by external sources, specifically by Iranian Revolutionary Guards Corps Qods Force operatives,” said Bergner. “In addition to training, the Qods force also supplies the Special Groups with weapons and funding of 750,000 to three million U.S. dollars a month. Without this support, these Special Groups would be hard pressed to conduct their operations in Iraq.”

Daqduq and the Qazali brothers

Daqduq was captured in the Iraqi city of Basrah in March 2007 along with two brothers, Qais and Laith Qazali. Qais was the leader of the Asaib al Haq, or the League of the Righteous, which is considered the most dangerous of the Shia terror groups, while Laith was a commander in the group. Qais was responsible for the January 2007 attack on the Karbala Joint Provincial Coordination Center. Five US soldiers were captured during the operation and were executed by Qazali's men as Iraqi police and troops closed in on the snatch team.

Despite the roles played by Qais and his brother Laith in killing US troops and working with Iran's Qods Force, the US military released the two brothers and hundreds of their followers to the Iraqi government between July and December of 2009. The Shia terrorists were freed in exchange for a British hostage and the bodies of four other Brits who had been executed by the League of the Righteous while in custody.

The League of the Righteous returned to terror activities shortly after the hostage exchange. In January of 2010, less than a month after Qais was finally freed, the terror group kidnapped Issa T. Salomi, a US civilian contractor, in Baghdad. In September 2012, Qais threatened to attack US interests in Iraq over a video that has angered Islamists and sparked protests in several Muslim nations.

Daqduq was part of the same Iranian-sponsored terror network that plotted to kill Saudi Arabia's ambassador to the US in 2011. In October 2011, the US Treasury Department designated five participants in the plot. One of them is Abdul Reza Shahlai, an IRGC-QF officer who planned the Jan. 20, 2007 attack in Karbala, Iraq. Shahlai oversaw the Qazali brothers' activities in Iraq.