The U.S. State Department’s Rewards for Justice Program announced today that is offering a $10 million bounty for information leading to the capture and prosecution of Maalim Ayman, a Shabaab military commander behind the deadly 2020 raid on a Kenya base used by the U.S. military for counterterrorism operations in East Africa.

Maalim Ayman now joins three other Shabaab leaders with a $10 million bounty on their heads. The United States has placed bounties on other Shabaab leaders over the last several years, though all with lesser rewards. Shabaab, al-Qaeda’s branch in East Africa, is itself a U.S. designated Foreign Terrorist Organization.

Ayman is the emir of Shabaab’s Jaysh Ayman, or its military wing inside northeastern Kenya. In this role, he oversees attacks across Kenya’s northern counties of Mandera, Garissa, Wajir, and Lamu. It is believed that Jaysh Ayman also conducts attacks in the extreme southern portions of Somalia, as well.

Maalim Ayman is believed to be below Ahmed Iman Ali, Shabaab’s emir for Kenya, and both Yassir Jiis, its overall military emir, and Maalim Osman, Shabaab’s external operations emir, in Shabaab’s hierarchy.

He was previously added to the list of U.S. Specially Designated Global Terrorists along with another Shabaab leader known as Abdullahi Osman Mohamed in 2020. Mohamad, also known as “Engineer Ismail,” is Shabaab’s emir for both its explosives department and propaganda output.

According to the U.S. government, Maalim Ayman prepared “the January 2020 attack on Camp Simba in Manda Bay, Kenya, that killed one U.S. military service member and two American contractors.” Though the impact of the raid was initially downplayed, the U.S. has since acknowledged the significance of the attack. 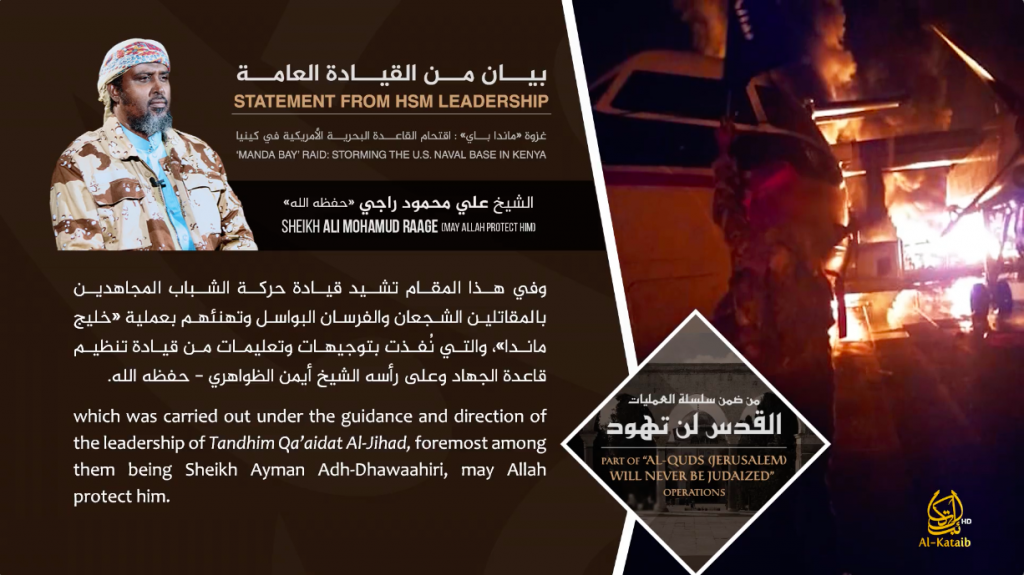 At the time, Ali Mohamud Rage, a senior Shabaab leader and its official spokesman, confirmed the Manda Bay raid was “carried out under the guidance and direction” of al-Qaeda’s leaders, specifically Ayman al-Zawahiri. The statement was then reiterated in official Shabaab propaganda on the raid (as seen above).

Zawahiri was al-Qaeda’s overall emir until July 2022, when the U.S. killed him in an airstrike in Kabul Afghanistan, where he was being sheltered and protected by the Taliban. Al-Qaeda has yet to confirm Zawahiri’s demise.

Ayman is not the only Shabaab leader behind the Manda Bay assault who has been targeted by the U.S. government. In February 2020, AFRICOM announced that it killed two Shabaab military commanders behind the attack in “precision airstrikes” near Saakow in southern Somalia.

AFRICOM stated that it killed a Shabaab commander and his wife, who was also reportedly a member of Shabaab and who was also involved in the attack. The two Shabaab officials were not named and Shabaab has not confirm their deaths.

The U.S. government has increased its rewards on several other members of Shabaab’s top leadership in recent months.

The moves are believed to have been made in conjunction with Somalia’s current major counter-offensive against Shabaab across much of central Somalia. As part of these moves, US also increased its drone targeting in the country and levied more economic sanctions on the group.

In Nov. 2022, the Rewards for Justice program upped the bounties for Abu Ubaidah Direye, or Abu Ubaidah Ahmad Umar, Mahad Karate, and Jehad Serwan Mostafa, to $10 million each.

Abu Ubaidah is the overall leader of Shabaab, while Mahad Karate is a deputy emir and a leader within Shabaab’s Amniyat (or internal security and intelligence wing) and its finance department. While Jehad Serwan Mostafa, is an American Shabaab leader who is regarded as “the highest-ranking U.S. citizen fighting overseas with a terrorist organization” by the U.S. government.

The rewards of $10 million for Maalim Ayman and the three other Shabaab leaders are at the top tier of Sunni jihadists.

Only the top leaders of both al-Qaeda and the Islamic State have generated higher bounties among Sunni jihadis. For instance, both Osama bin Laden and Ayman al-Zawahiri each demanded a $25 million bounty and former Islamic State head Abu Bakr al-Baghdadi once had a similar price tag on his head.

Bill Roggio is a Senior Fellow at the Foundation for Defense of Democracies and the Editor of The Long War Journal. Caleb Weiss is a research analyst at FDD’s Long War Journal and a senior analyst at the Bridgeway Foundation, where he focuses on the spread of the Islamic State in Central Africa. Follow Bill on Twitter @billroggio. FDD is a Washington, DC-based, nonpartisan research institute focusing on national security and foreign policy.