On Aug. 10, jihadists belonging to the Allied Democratic Forces (ADF), the local name for the Islamic State’s Central Africa Province (ISCAP), raided the central prison in the eastern Congolese city of Butembo. The attack, the group’s first major foray inside Butembo, freed almost 800 inmates. This marks the second major prison break conducted by the group since 2020.

The Islamic State was relatively quick to take credit, describing in a short communique released the next day through its Amaq News that “fighters of the Islamic State yesterday stormed the central Kakwangura prison in Butembo city in the territory of North Kivu of eastern Congo, succeeding in liberating dozens of Muslim prisoners.”

A longer, more detailed statement from the jihadist group goes on to describe the assault in more detail, contending it was a coordinated assault performed by three separate fighting groups.

According to the Islamic State “the first [group] attacked a barracks of the guards and killed at least two members while other guards fled; the second group stormed the prison after breaking its walls and burning it down; at the same time the third group spread along the roads leading to Butembo with the goal of cutting off any enemy reinforcements.”

The statement goes on to say that the jihadists divvied up the freed prisoners among the different units involved in the break before ultimately withdrawing.

The ADF’s raid on the Kakwangura Prison was the first of its kind for the group inside Butembo. While the ADF maintains a support network inside the city, it had so far not conducted a major attack inside Butembo until Aug. 10.

According to Congolese officials, a group of around 80 ADF fighters assaulted the Kakwangura prison after having infiltrated the city from the Mwalika valley, a part of Virunga National Park approximately 30km northeast of Butembo in North Kivu’s Beni territory. The ADF has maintained a series of camps in the Mwalika valley since the late-1990s, most prominently serving as the primary site where new recruits are inducted and trained.

This route to Butembo from the Mwalika valley would have taken the ADF through Bashu Chiefdom, a hilly highland area with a significant population and several large towns. The ability of such a large group of fighters to traverse this terrain without reports or interception by security forces illustrates the ADF’s continued ability to mount bold operations in challenging environments.

Congolese security officials stated that the jihadists were attempting to free their members imprisoned within, particularly a specific member known as Kizito. Kizito is reported to have been rearrested sometime following the jailbreak.

The prison assault was conducted during the night, which involved a firefight between the jihadists and prison security guards. Officials stated that at least five ADF members, two policemen, and one civilian were killed in the ensuing clashes.

Over 800 inmates were freed in the 15-minute operation, though the Congolese military now states that over 250 have since been recaptured. According to inmates who have been recaptured, the ADF has also attempted to recruit some of the non-members it freed from the prison by offering a monthly salary for new recruits. The ADF made similar offers to non-members freed during the October 2020 assault on Kangbayi prison in Beni. 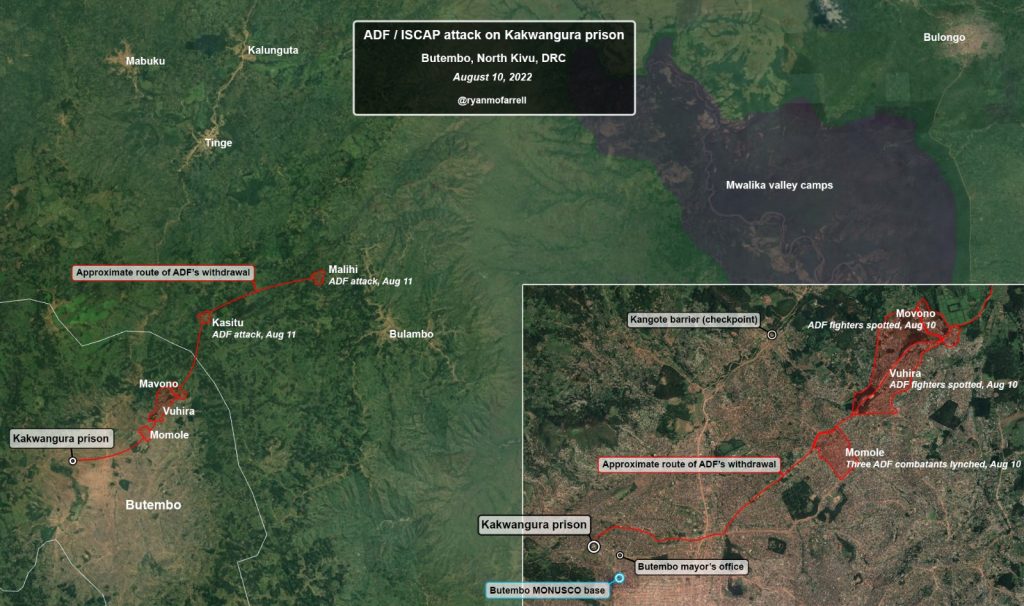 As the ADF members withdrew eastwards through Butembo city and rural villages in Bashu Chiefdom back into the Mwalika valley, the group clashed with security forces and civilians alike. At least 3 ADF members involved in the prison break were reportedly lynched by civilians in an eastern district of Butembo after being detained by locals during their withdrawal from the city.

Local media reports that clashes with the Congolese military persist across several villages in Beni territory’s southern Bashu area as the militants continue their retreat back to their camps in their more typical areas of operation. At least three civilians have been killed in such attacks. The Islamic State has formally claimed one such clash in Bashu following the prison break.

The assault on Kakwangura prison comes in the context of significant instability in Butembo and surrounding areas. Protests demanding the withdrawal of the United Nations Organization Stabilization Mission in the Democratic Republic of the Congo (MONUSCO), the world’s largest UN peacekeeping mission, have spread to much of eastern Congo, and in Butembo resulted in the deaths of seven demonstrators and three peacekeepers on July 26.

Last week’s prison break in Butembo represents the second such operation conducted by the ADF since 2020. In Oct. 2020, the ADF raided the Kangbayi prison inside Beni city, to the north of Butembo, freeing at least 1,200 inmates.

The ADF quickly claimed responsibility for that operation in the name of the Islamic State on its social media channels before the Islamic State issued its own formal communique. The ADF stated that Kangbayi raid was in response to a then-recent Islamic State call for the liberation of Muslim prisoners.

Another jailbreak, a relatively minor one in which almost 20 inmates were freed by the ADF, was conducted earlier this year. However, that raid, which took place in the town of Nobili, a border town between Congo and Uganda, is not of the same scale or significance as the prison breaks in Beni or Butembo.

All three prison breaks, however, exist as part of the Islamic State’s core overall global strategy that it dubs “Breaking the Walls,” as the group’s central leadership has routinely emphasized the importance of and need for prison break operations around the world.

Jailbreaks can often act as a boon for jihadists. In addition to the major propaganda value of such operations, jailbreaks can swell ranks, reinforce capabilities by freeing more highly-trained individuals, and provide new senses of direction by freeing leaders or key personnel.

In addition to the aforementioned breaks in Congo, the Islamic State’s global wings have also recently mounted such operations in Nigeria, Syria, and Afghanistan, while  recent operational expansions by the Islamic State in Mozambique have raised fears of future jailbreak attempts in Mozambique’s northern Cabo Delgado Province.

It is too early to tell what the long-term impacts will be of this week’s jailbreak in Butembo. The Kangbayi break in 2020 was a major boon for the jihadist group, boosting morale, troops numbers, and capabilities as important members were freed. It is possible that the raid in Butembo may too be a harbinger for more violence conducted by the ADF across eastern Congo.

Both authors are senior analysts at the Bridgeway Foundation, a philanthropic organization dedicated to ending and preventing mass atrocities. FDD is a Washington, DC-based, nonpartisan research institute focusing on national security and foreign policy.