The leader of the Movement of the Taliban in Pakistan (TTP) said that his group “is a branch of the Islamic Emirate of Afghanistan” during a tour of several of the group’s bases across Pakistan’s tribal areas and northern districts.

The Afghan Taliban, however, has denied Mehsud’s statement.

TTP emir Noor Wali Mehsud made the statement in a nearly hour-long video that documented his entourage’s travels in a large military convoy across what the TTP claims is significant swaths of Pakistan’s northern areas. The large TTP convoy openly flew its flag in broad daylight while traveling through the countryside. 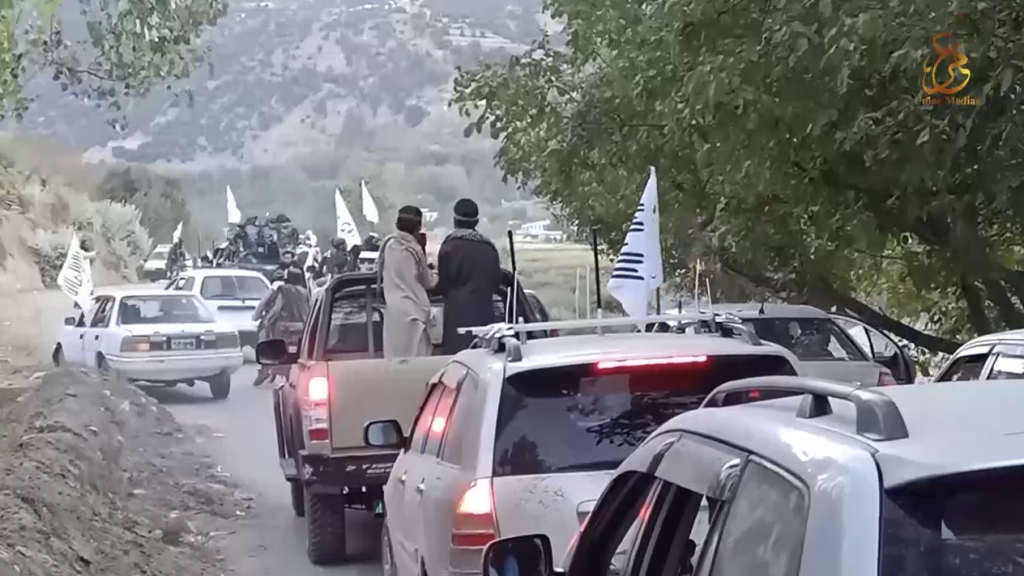 The large TTP convoy openly flies its flag while traveling throughout the countryside.

According to the video, the Taliban emir visited TTP headquarters in various districts and towns of Pakistan’s Khyber Pakhtunkhwa province, including: Malakand, Bajaur, Peshawar, Mardan, Khyber, Dara Adamkhel, and Hazara.

Peshawar is the provincial capital of Khyber Pakhtunkhwa, and Bajaur is one of several TTP strongholds in Pakistan’s tribal areas. Many of the areas visited by Mehsud were controlled at one time by the TTP between 2007 and 2012.

Hundreds of TTP members and fighters can be seen throughout the video, including dozens riding on Afghan police vehicles in Mehsud’s convoy. 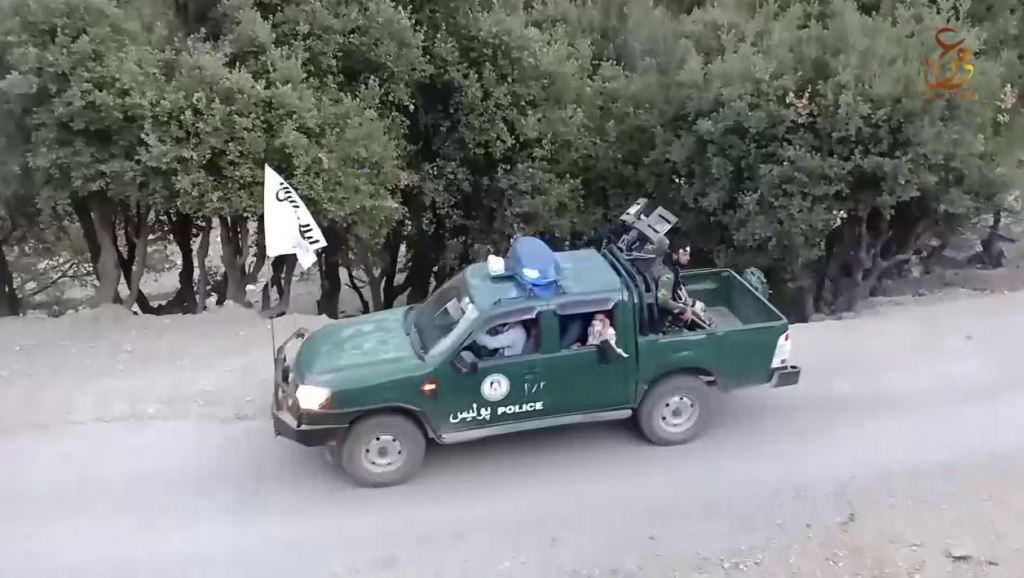 One of several police vehicles from the now-defunct Afghan National Police.

The presence of the Afghan police vehicles and other equipment have caused some to speculate the video was actually recorded in Afghanistan, however, this cannot be independently verified by FDD’s Long War Journal.

If the video was recorded in Pakistan, which is far more likely, it is evidence that the TTP is not as weak as claimed by the Pakistani military and government, which is currently attempting to negotiate a peace deal with the terror group.

At each TTP group headquarters, Mehsud can be seen greeting and praying with his fighters before preaching to the men. One speech, in particular, however, stands out.

At one point in the video, Mehsud very clearly stated that “the [TTP] is a branch of the Islamic Emirate of Afghanistan [the Taliban’s name for itself] and is part of that umbrella on this land.” He continued by saying that the TTP will fight until Pakistan, like Afghanistan, is also under Shari’a law.

Other jihadist groups in the region, including the majority ethnic Uzbek Islamic Jihad Union, which has fought alongside the Afghan Taliban, have celebrated Mehsud’s statement on social media.

The Afghan Taliban, however, has insisted on downplaying Mehsud’s comment. Zabihullah Mujahid, the official spokesman of the Taliban, officially rejected Mehsud’s comment in an interview with Arab News late last week.

“They are not, as an organization, part of [the Islamic Emirate] and we don’t share the same objectives,” Mujahid said. “We advise TTP to focus on peace and stability in their country. This is very important so they can prevent any chance for enemies to interfere in the region and in Pakistan.”

Lastly, Mujahid demanded Pakistan to “look into their [TTP’s] demands for the better of the region and Pakistan.”

The Afghan Taliban has good reasons for separating itself from the TTP at this moment in time.

Additionally, the Afghan Taliban is attempting to secure the release of funds frozen after the fall of the previous government in order to finance its nascent government. Admitting close ties with the TTP would sabotage both efforts.

Bill Roggio is a Senior Fellow at the Foundation for Defense of Democracies and the Editor of FDD’s Long War Journal. Follow him on Twitter @billroggio. FDD is a Washington, DC-based, non-partisan research institute focusing on national security and foreign policy.