A notorious Taliban commander who organized attacks in and around the capital of Kabul, including deadly attacks on U.S. soldiers and civilians, was appointed by the Taliban to serve as the governor of Kabul province.

Baryal was named the governor of Kabul province on Nov. 7, 2021, according to Taliban spokesman Zabihullah Mujahid. Baryal was one of 44 Taliban leaders who were appointed provincial-level positions. All of those appointed are hardcore Taliban members.

Baryal led what was known as the Qari Baryal Group, which by the early 2010s was estimated to have 150 to 200 fighters in its ranks. Baryal, who is from the Tagab Valley in Kapisa and began his career as a commander in Hizb-I-Islami, rose through the ranks of the Taliban to lead forces in central and northeastern Afghanistan, including the provinces of Kabul, Kapisa, Parwan, Panjshir, and Kunar.

A leader in the Kabul Attack Network

Baryal was undoubtedly a key commander in what the U.S. military and NATO used to call the Kabul Attack Network. This network pooled fighters and resources from the Taliban, Al Qaeda, the Islamic Movement of Uzbekistan, the Islamic Jihad Union, the Turkistan Islamic Party, and Hizb-I-Islami Gulbuddin in order to conduct attacks in and around Kabul. The network extended into Logar, Wardak, Nangarhar, Kapisa, Ghazni, Parwan, and Zabul Provinces.

Baryal and his network was known to facilitate the movement of weapons, explosives, and suicide bombers from the Pakistan border to Kabul. The NGIC report noted that Baryal was “involved in the supervision of IED production, suicide personnel allocation, and overall attack planning and execution.” The Qari Baryal Group helped plan and coordinate numerous attacks against military bases in Kabul and Parwan provinces, including the sprawling Coalition airbase at Bagram.

A link to Iran’s Qods Force 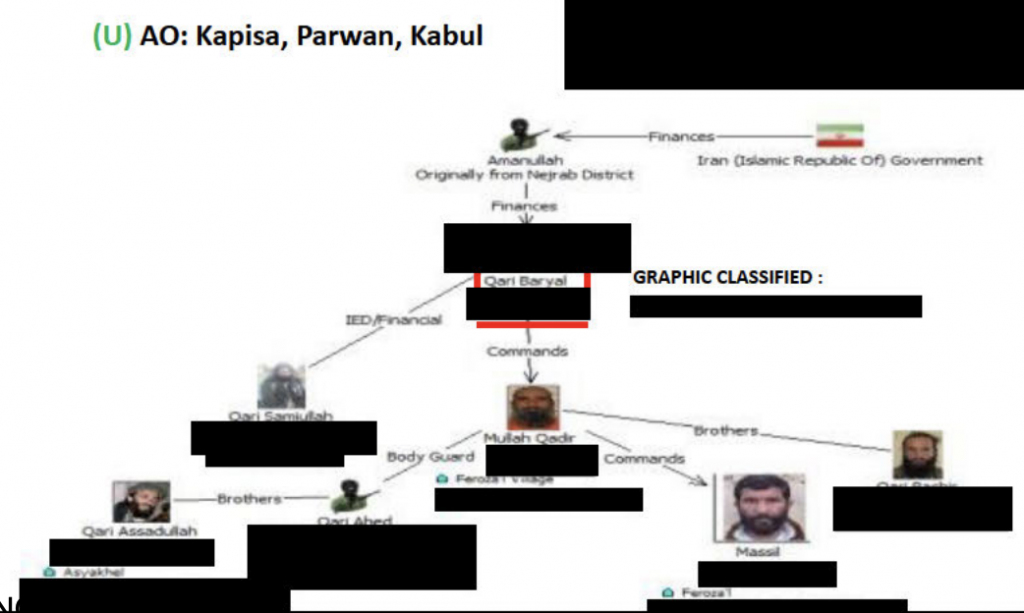 Baryal received direct support from Iran’s Qods Force, according to the recently declassified NGIC report. NGIC even produced a graphic (produced above) to highlight the relationship. Portions of the graphic were redacted upon declassification.

According to the NGIC report, as of October 2012, a “Taliban fighter Amanullah . . . is currently living in Tehran, Iran (IRN)” and “is working as a financial liaison officer between IRN and the Taliban.”

“Iranian Government funnels money through Amanullah to support the TB’s [Taliban’s] fight against U.S. forces in AFG [Afghanistan,” the report noted. Baryal received funds directly from Amanullah to fuel attacks in and around Kabul.

Iran’s Qods Force supported the Taliban through its Ansar Corps, which was assigned to direct military and political operations inside Afghanistan.

The U.S. military and the International Security Assistance Force, what used to be known as NATO’s command in Afghanistan, reported that Baryal and “several” Taliban fighters were killed in an airstrike in Kunar province on Jan. 7, 2011.

At the time, ISAF described Baryal as an “al-Qaida-associated Taliban leader” and “an active attack planner who led at least 25 fighters” who “maintained close contact with al-Qaida leaders and facilitators.” However, the Taliban never confirmed his death, and only noted that several low-level fighters were killed in the airstrike.

Baryal clearly survived the Jan. 2011 strike, continued to serve as a top Taliban leader in central and northern Afghanistan, and is now governing influential Kabul province.

Bill Roggio is a Senior Fellow at the Foundation for Defense of Democracies and the Editor of FDD’s Long War Journal. Follow him on Twitter @billroggio. FDD is a Washington, DC-based, non-partisan research institute focusing on national security and foreign policy.