As Sahab, al Qaeda’s main propaganda arm, released a video featuring Ayman al Zawahiri earlier today. Although the hour-long production was disseminated on the 9/11 anniversary, it does not appear to have been recorded for the occasion.

As Sahab’s production has slowed to a trickle and Zawahiri hasn’t appeared on screen in months. But the new video confirms that the elderly al Qaeda leader did not die last year, as some claimed. Zawahiri specifically praises an attack in Syria that occurred on Jan. 1 of this year. Other parts of the video may have also been recorded after that time.

In addition to the video, As Sahab released a massive, 852-page tract authored by Zawahiri. That book deals with political corruption and related themes. The introduction authored by Zawahiri is dated April 2021 – another indication that he is alive. And all of the promotional materials published by As Sahab read “May Allah Protect Him” after the al Qaeda leader’s name, meaning he is still with the living.

The video is titled “Jerusalem Will Not Be Judaized,” the same title given to a campaign of terror conducted by al Qaeda’s branches in Africa. This installment is the first part in what is intended to be a multi-part series. It is subtitled “Arab Zionists from Faysal to Bin Zaid.”

Zawahiri and other al Qaeda leaders criticize some Muslim-majority states for normalizing relations with Israel. They give a lengthy presentation, repeating many of the same conspiratorial themes employed by al Qaeda since the 1990s. But there are a few other noteworthy parts of the production.

Multiple senior al Qaeda figures died during Zawahiri’s lengthy media absence. And he takes the time to praise some, but not all, of them.

Zawahiri begins by praising a series of “martyrs” who died from Dec. 2019 onward. The first is Mohammed Saeed al Shamrani, the Saudi air force officer who carried out the Dec. 6, 2019 mass shooting at Naval Air Station Pensacola. Al Shamrani was killed after he began opening fire. The FBI found that al Shamrani had “significant ties” to AQAP, including “specific conversations with overseas AQAP associates about plans and tactics.”

The second jihadist honored by Zawahiri is Qasim al Raymi, the AQAP emir who was killed in a Jan. 2020 airstrike in Yemen. Al Raymi, (also known as Abu Hurayah al San’ani) claimed “full responsibility” for the Pensacola shootings shortly before his demise.

Zawahiri then remembers Hisham al Ashmawy, a former Egyptian officer who became a top al-Qaeda operative in Libya and Egypt. Al Ashmawy was detained in Libya in 2018 and later executed in Egypt in Mar. 2020. Zawahiri mentions in passing two of al Ashmawy’s companions as well, the jihadists Emad Abdul Hameed and Umar Rifa’i Suroor.

Next is Abu Musab Abdel Wadoud (a.k.a. Abdulmalek Droukdel), the emir of Al Qaeda in the Islamic Maghreb (AQIM), who was killed in a June 2020 counterterrorism raid by French forces in Mali. Zawahiri also mentions two of his colleagues, Abdul Hameed and Abu Abdul Kareem.

Zawahiri honors two other veteran al Qaeda members who were killed in Idlib province, Syria in 2020: Abu al Qassam al Urduni and Abu Muhammad al Sudani. Al Urduni was the brother-in-law of the founder of al Qaeda in Iraq, Abu Musab al Zarqawi. He remained loyal to al-Qaeda throughout the tumultous jihad in Syria. Al Urduni was killed in a drone strike in June 2020. Al Sudani, another al Qaeda loyalist, perished in a missile strike carried out in mid-October. 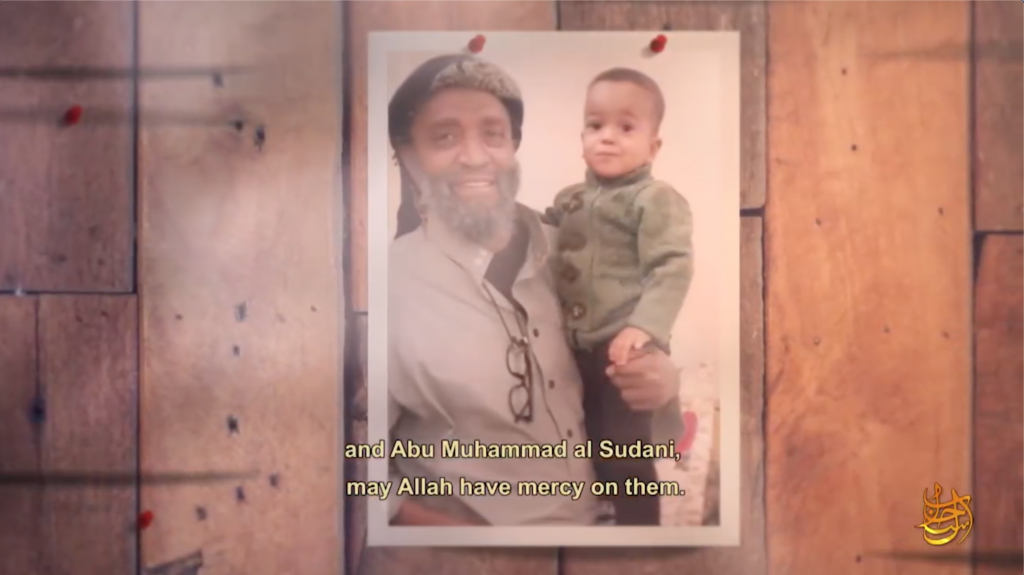 All of those remembered by Zawahiri are well-known al Qaeda figures – including the deceased emirs of two al Qaeda branches. But other figures are conspicuously absent from Zawahiri’s roll call of the martyred.

Two senior Egyptians who were killed in 2020 – Abu Muhammad al Masri and Husam Abd al Ra’uf – go unmentioned. Al Masri, who served as Zawahiri’s deputy emir, was gunned down in a secretive Israeli operation in Tehran in Aug. 2020. Al-Ra’uf was killed in a Taliban-controlled village in Ghazni province, Afghanistan in Oct. 2020.

Both men had served alongside Zawahiri since the 1980s. Zawahiri may not want to admit that al-Masri was operating inside Iran.

Zawahiri’s discussion is spliced together with talks given by the current leaders of AQAP and AQIM, both of whom assumed their roles after their predecessors were killed last year. AQAP is represented by its emir, Khalid Batarfi, as well as the ex-Guantanamo detainee Ibrahim al Qosi, who served Osama bin Laden in the 1990s. AQIM’s emir, Abu Ubaidah Yusef al Annabi, speaks at length.

As Sahab’s editors include text at the bottom of the screen crediting the media houses for AQAP (Al Malahem Media) and AQIM (Al Andalus Media) for their assistance in producing the clips. An introductory screen at the beginning of the production also includes the watermarks for all of the al Qaeda media houses as an indication of their unity.

Praise for the Taliban

Zawahiri mentions the 9/11 hijackings only briefly, as a way to introduce America’s withdrawal from Afghanistan. “And let us not forget that nineteen Mujahideen, the warriors of Islam, stabbed America in its heart…an injury the like of which America had ever tasted before and today it is making its exit from Afghanistan, broken, defeated, after twenty years of war,” Zawahiri says.

AQIM’s Annabi then heaps praise on the Taliban, as images of the group’s political delegation are flashed across the screen. Footage of Taliban fighters inside the presidential palace in Kabul are also spliced into the video. However, the testimony given alongside those images was recorded much earlier. The scenes in Kabul come from mid-August, but Annabi discusses President Trump’s time in office, saying he was humiliated by the Taliban. 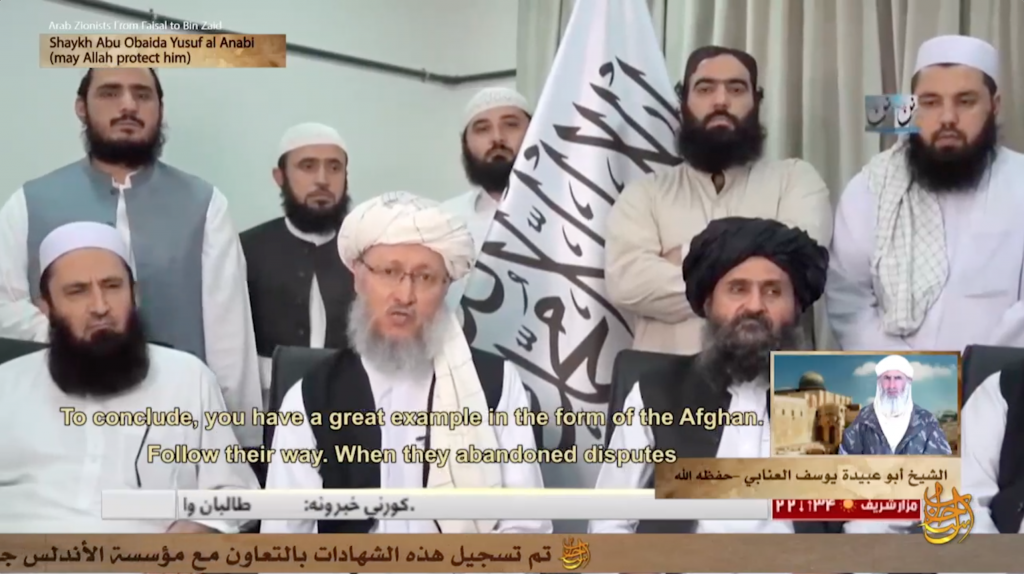 “To conclude, you have a great example in the form of the Afghan,” Annabi says. “Follow their way. When they abandoned disputes and disagreements and united under a single flag and a single leadership – in whose faith, knowledge and sincerity they had trust – then severed their ties with client regimes and treacherous governments and adopted the path of jihad and martyrdom, their guns resting on their shoulders, their souls in their palms, Allah gave them victory and defeated their enemy.”

Their “enemy” is America.

“It was the enemy that submitted to their conditions in humiliation,” Annabi says of America. “Today, Trump, who has proposed the ‘deal of the century,’ lowers his head in humiliation as he receives the ‘slap of the century’ from the Afghans who understand the Americans and the language they understand.” The “deal of the century” is a reference to the Abraham Accords the Trump administration helped broker between Israel and various Muslim-majority states. 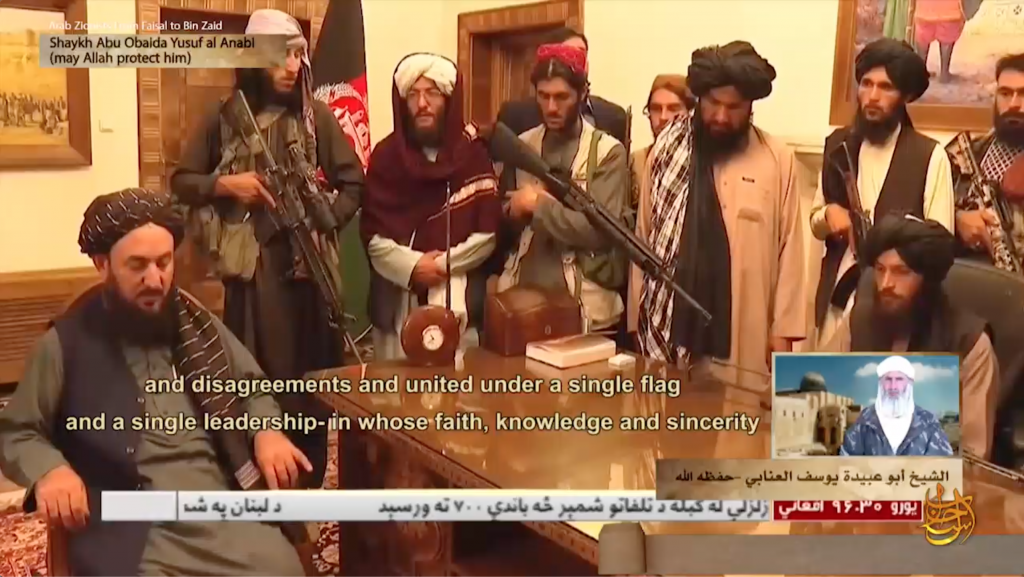 Taliban fighters in the presidential palace in Kabul

Zawahiri builds on Annabi’s testimony to urge patience in jihad. “So beware of those who let down, fear, and call for surrender, humiliation, and submission,” Zawahiri says.

Azzam taught that “Jihad is a lifelong duty in Afghanistan, in Palestine, in the Philippines, and wherever despots, tyrants and oppressors exist.”

Zawahiri uses Azzam’s testimony to argue that the situation is the same today.  “We must fight the battle on different fronts, united though as a single Ummah. Palestine is thus Kashmir, Kashmir is Grozni, Grozni is Idlib, Idlib is Kashgar, and Kashgar is Waziristan,” Zawahiri says. (Zawahiri’s mention of Kashgar, which is in Xinjiang region of China, may be provocative at the moment. The Taliban has been assuring the Chinese that it will not export jihadism into Xinjiang and Beijing has offered to support the Islamic Emirate.)

Annabi returns to discuss how Muslims must liberate themselves from the ideas of the Zionist-Crusader alliance. To this, Zawahiri adds: “We must therefore fight this battle against the Crusader alliance and its Zionist allies at all levels, beliefs, thought, education, politics and war.”

Zawahiri also uses the opportunity to criticize Abu Bakr al-Baghdadi, the head of the Islamic State (ISIS), who broke his oath of allegiance to the al-Qaeda emir.

“We must unite and close ranks,” Zawahiri says. “Every effort aimed at dispersing our ranks, creating fissures and violating oaths is a crime, and the one who engages in such acts is a criminal whether it is Baghdadi or his followers, who believe that he was the Caliph, or anyone else for that matter.”

Holds up Hurras al-Din’s attack on Russians in Raqqa, Syria as an example

Zawahiri wants his audience to prepare for a long jihad.“We must get used to exercising patience,” he says. “We must understand that repelling this Crusader campaign entails the efforts of successive generations.”

“It demands wearing down the enemy everywhere,” Zawahiri says. He argues that the jihadists should pursue a strategy of “exhausting” their well-equipped enemies, who “can be bled to death using inventive ideas, simple tools, and waging a war in which the entire world is the battlefield.”

“The current stage demands that we exhaust the enemy until it whines and moans due to economic and military bleeding,” Zawahiri argues. “It is in this context that the importance of operations outside the theater in which the enemy expects us to strike, operations on enemy soil and beyond enemy lines becomes evident.”

“One of the most prominent operations in this regard” was Hurras al-Din’s bombing at a Russian base in Raqqa, Syria on Jan. 1 of this year, Zawahiri says. Hurras al-Din is an al-Qaeda loyalist group fighting in Syria. “This operation was a practical example of breaking the enemy’s military siege,” Zawahiri says.

The al-Qaeda emir implies that Hurras al-Din was able to cooperate with others in the fractious Syrian jihadi scene, perhaps the much larger Hay’at Tahrir al-Sham (HTS), to execute the attack. “By ignoring minor issues and differences and focusing on the priorities, this operation turned the compass in the right direction,” Zawahiri argues. He asks Allah to “accept the martyrs of this operation and greatly reward all those who supported this operation.”

“May Allah guide our Muslim brothers and Mujahideen in Syria and elsewhere to unite with their Ummah to their common war against an enemy united against them,” Zawahiri says.

Much of the production is organized around a similar theme. “We are a united Ummah, waging one war on different fronts,” Zawahiri claims. The jihadists’ experience has been rather different over the past decade, but the aging al-Qaeda leader hopes the coming years witness a more unified effort against the so-called “Zionist-Crusader” conspiracy.

Thomas Joscelyn is a Senior Fellow at the Foundation for Defense of Democracies and the Senior Editor for FDD’s Long War Journal. Follow Tom on Twitter @thomasjoscelyn. FDD is a Washington, DC-based, non-partisan research institute focusing on national security and foreign policy.