The Taliban blames America for the 9/11 hijackings in a newly-released video that was aired on Afghan television. The production, “Victorious Force 3,” is the latest in a series of short films celebrating the Taliban’s “martyrdom-seeking” squadrons — that is, the units responsible for conducting complex suicide attacks.

The nearly 40-minute film, which was broadcast on Afghanistan’s national RTA television station, is intended to commemorate the Taliban’s victory over the U.S.-backed government and Western forces. The Taliban describes America as the true “terrorist” party, while blaming the U.S. for the 20-year war.

The September 11, 2001 “attacks were the result of the United States’ policy of aggression against the Muslim world,” the narrator says. Reenactments and archival footage of the 9/11 hijackings are shown on screen as the narrator faults America and the West for al Qaeda’s deadliest day. 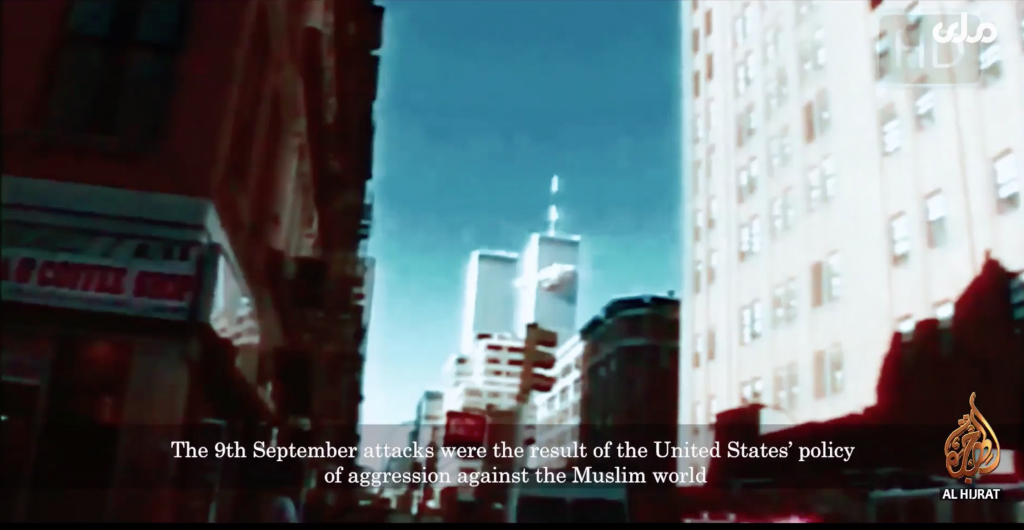 The Taliban has never accepted responsibility for harboring and working with al Qaeda prior to 9/11. The two remain intertwined to this day.

For nearly two decades, the Taliban has offered the same defense of 9/11 given in “Victorious Force 3.” For example, the Taliban’s founder and first emir, Mullah Omar, blamed U.S. “policy” for the 9/11 hijackings. In an interview conducted in late September 2001, Omar said “America has created the evil that is attacking it,” adding that this “evil will not disappear even if I die and Osama [bin Laden] dies and others die.”

Omar defied America by refusing to turn over bin Laden after the hijackings — a fact that Taliban and al Qaeda supporters have celebrated once again in recent weeks.

The Taliban has repeated Omar’s justifications for 9/11 many times since 2001. In mid-2019, for instance, the Taliban claimed that 9/11 was a “heavy slap on their dark faces,” adding it “was the consequence of their interventionist policies and not our doing.”  The U.S. was negotiating with the Taliban at the time, yet the brazen production did nothing to stop Washington from endorsing the Taliban as its supposed counterterrorism partner.

In more recent weeks, the Taliban’s spokesman has claimed that there is “no proof” Osama bin Laden was even responsible for 9/11. This is an obvious lie, as al Qaeda itself has repeatedly boasted of its responsibility for the hijackings.

There is no explicit mention of al Qaeda in “Victorious Force 3.”

“Afghans were not involved in these attacks,” the narrator says. While true, it is also meaningless. America invaded Afghanistan in 2001 because al Qaeda’s headquarters was located there, all 19 of the 9/11 hijackers were trained in the country, and Mullah Omar refused to turn over bin Laden or any other al Qaeda leader.

The narrator of “Victorious Force 3” claims the U.S. and its allies “launched a military invasion without considering the reasonable stance of the Islamic Emirate on the issue.” He pivots to another old Taliban motif, namely that the war was really intended to topple the Taliban’s Islamic government.

The U.S. “invaded Afghanistan and deprived Afghans [of an] Islamic system,” the narrator claims, adding that the West “inflicted on Afghans the most notorious type of democracy, [with] the most infamous faces in modern history.” The U.S. supposedly “insisted on changing the intellectual and ideological boundaries of Afghans, and did not refrain from any kind of cruelty and atrocities to force Afghans to accept their aggression.”

After portraying America as the aggressor in 2001 and throughout the war, the narrator argues that “the Muslim nation of Afghanistan was forced to stand up against terrorist America and its allies, to cleanse its soil of their filthy existence and to regain its independence, bring and establish an Islamic system of their choice.”

That “system” is the Taliban’s own Islamic Emirate of Afghanistan. The editors of “Victorious Force 3” flash an image of Special Representative Zalmay Khalilzad on screen. Khalilzad negotiated the withdrawal agreement between the U.S. and the Taliban, which paved the way for the jihadists’ final victory. 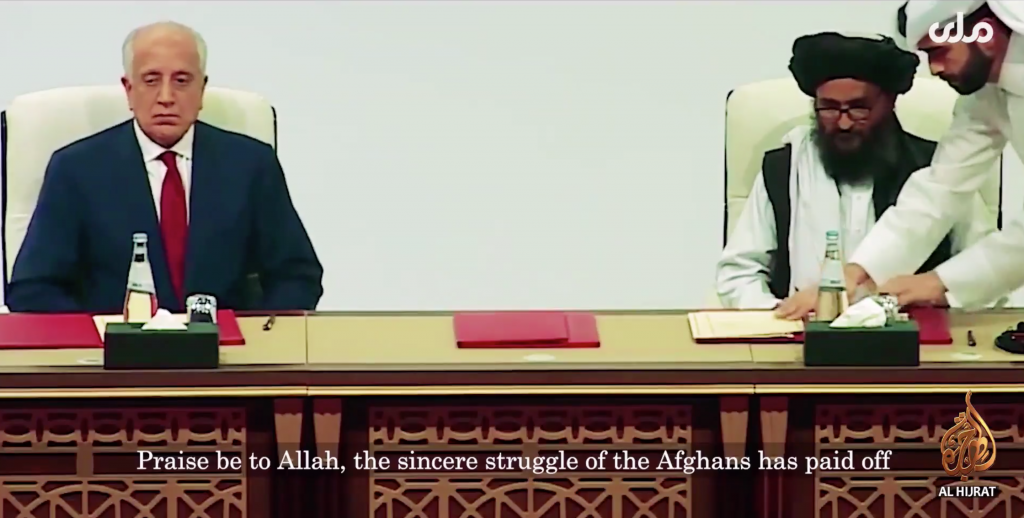 “Praise be to Allah, the sincere struggle of the Afghans has paid off, the invaders are flowing from Afghanistan and their puppet regime is collapsed,” the narrator says.

Much of “Victorious Force 3” is devoted to a celebration of the Taliban’s “martyrdom-seeking” units, which played a a prominent role in the group’s military victories. A narrator crows that “under the leadership of the Islamic Emirate,” Afghanistan “now has a strong political position and [an] advanced military, jihadi, and martyrdom seeking force,” which “is fully prepared and proud to make any sacrifice to defend its faith, land, and independence against any terrorist.”

A delegation from the Taliban’s military commission is shown arriving at Al-Fatih military camp. Their faces are blurred so as to obscure their identity. An “honor” guard appears before them before the delegation inspects “various martyrdom-seeking squads” in a “military parade.” 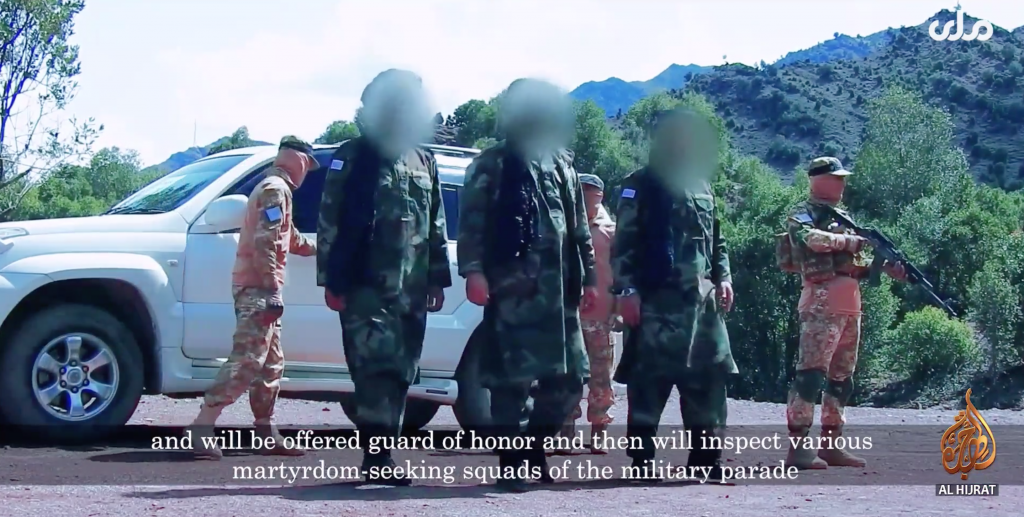 It is not clear if Mohammad Yaqub, the son of Mullah Omar, is present during the ceremony. Yaqub is a deputy emir in the Taliban’s Islamic Emirate and also the head of its military commission. An audio clip of Yaqub praising the Taliban’s suicide squads plays as the units march in front of a viewing lodge, where the military committee’s delegation sits.

“The Martyrdom-seeking force now has a heavy responsibility,” Yaqub explains. “They will be the basic force in protection of Islamic Emirate and the Islamic system.”

That is, even though the war against the U.S.-backed government has been won, the “martyrdom-seeking” units are not done fighting.

“We will increase our efforts many folds to strengthen and equip this force, we will recruit all the righteous cadres who are skilled in various military arts, and in this regard we will effectively use all resources in accordance with the guidelines of Islamic Sharia,” Yaqub says. “All the people of Afghanistan must carry out the duty of jihadi training as much as possible, every citizen must be [a] capable military mujahid and must be ready at any moment to defend independence, land and the Islamic system.”

A speaker emphasizes that the work of the “martyrdom-seeking” squadrons isn’t finished, congratulating them “on the successful completion of the first phase of your mission.” Moreover, the speaker claims that the “current” problems encountered by “the Islamic Ummah are due to negligence in military training,” meaning the worldwide community of Muslims should receive similar instruction.

The video showcases the “military skills and tactics” of several different types of “martyrdom-seeking” units. A speaker describes the role played by each squadron as its men march in front of the viewing lodge. Each unit wears different garb signifying their specialization.

First is the “vest coat martyrdom-seekers squadron,” which “destroys enemy gatherings, infantry patrols, and high-ranking officials.” As the name of this outfit implies, its members wear explosive vests.

The second squadron is comprised of “martyrdom-seekers” who emply “artillery and heavy car bombs.” This group is trained to initiate “large and heavy attacks” to “destroy the enemy’s fast moving targets, military fortifications, airfields, oil and weapons depots and other facilities.”

The fourth “martyrdom-seeker” group is dedicated to “infantry” operations, in which its members “destroy the enemy’s stationary and moving targets in face-to-face attacks and ambushes.”

The fifth unit shown is the “laser martyrdom-seeking squadron,” which “destroys enemy security personnel and patrols [with] their laser precision strikes.” Such operations are intended to “provide the Mujahideen with the opportunity to carry out successful offensive[s].”

The seventh and final “martyrdom-seeking” squadron is dedicated to “urban commando operations.” This “group destroys enemy’s stationary and moving targets in the cities.” It also “purge[d] administrative and military installations from the enemy’s presence and brought them under their control.”

After all seven units march in front of the viewing lodge, the Taliban displays the various “heavy” and “light” weapons they use, as well as “various types of mines.” The “most prominent” weapons are the “yellow barrel, vest bomb and car bomb,” a speaker says.

After all of the ominous imagery, “Victorious Force 3” closes with a benign-sounding statement from the Taliban’s “Emir of the Faithful,” Hibatullah Akhundzada, who sacrificed his own son in a suicide bombing in 2017.

“After withdrawal of all foreign forces from the country we want good and strong diplomatic, economic and political relations with the rest of the world, including United States, within the framework of mutual interaction and commitment, which is better for all sides,” the statement from Akhundzada reads.

Such rhetoric is empty, given that the Taliban still blames America for the 9/11 hijackings while celebrating its own “martyrdom” units.