Al Qaeda’s main propaganda arm, As Sahab, has released a new video titled, “The Wound of the Rohingya is the Wound of the Ummah.” The 21-minute propaganda film features undated audio clips of Ayman al Zawahiri, the overall emir of the global terrorist and insurgency organization.

The video is styled like a short documentary, with footage of Western commentators spliced together with scenes of soldiers in Myanmar committing atrocities against civilians. A narrator comments throughout, using the images to make various points. The release opens with an image of As Sahab’s logo alongside the watermarks of the media houses for each of al Qaeda’s regional branches. This graphic (seen below) is commonly used in al Qaeda videos and is intended to convey the global organization’s cohesion. 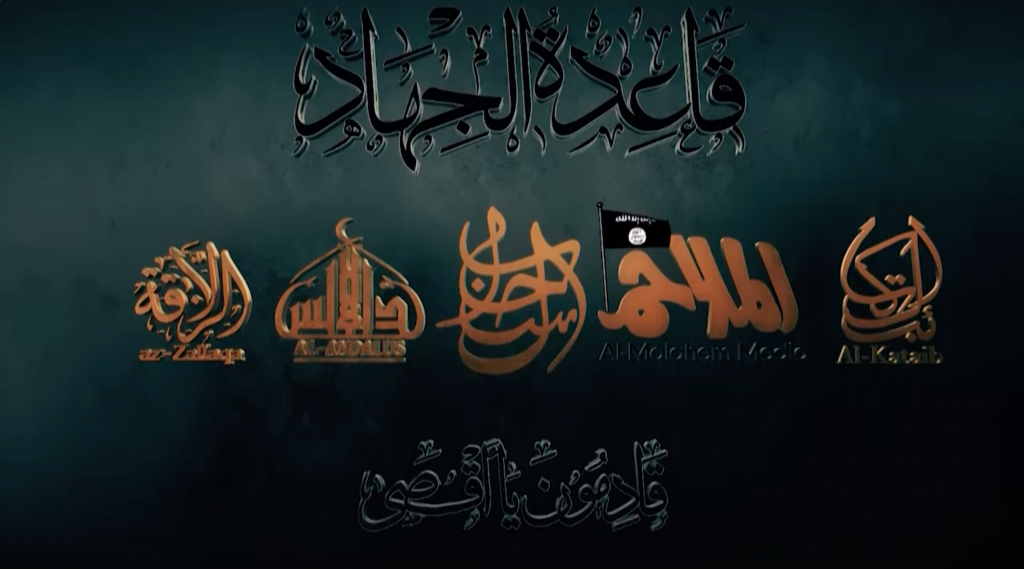 “The entire world has witnessed the countless massacres that the Rohingyan Muslims have been subjected to,” Zawahiri says toward the beginning of the production. But this “problem” has led to only “slight condemnation and token gestures of humanitarian aid,” he adds.

As Sahab’s narrator uses Zawahiri’s words to launch into a broadside against democracy, the West and the international community.

“The latest coup [in Myanmar] has shaken the governments and organizations in the hypocritical Western World for which the idol of democracy is more sacrosanct than the slaughter of thousands of innocent people and the forced displacement of millions,” As Sahab’s man says, according to an English-language transcript of his remarks. This same narrator goes on to criticize the Western media and diplomats for defending the “democratic government of Myanmar,” even while it was allegedly an “active participant in the genocide of the Rohingyan Muslims and the subsequent cover up of the crimes.”

The video includes archival footage of Myanmar’s deposed civilian leader, Aung San Suu Kyi, alongside President Barack Obama at the White House. Other images of former Secretary of State John Kerry and current President Joseph Biden are used to underscore America’s support for Myanmar’s democracy, which al Qaeda accuses of being complicit in the genocide.

“Instead of holding this government accountable for its abetment in the crimes committed by the military, Western governments and organizations strongly backed it and are today demanding its return,” As Sahab’s narrator says.

Zawahiri then accuses the West of hypocrisy for failing to truly punish Myanmar. “As for the so-called democratic government of Myanmar, upon which the West had lavished much praise for its success in establishing a blind democratic order, no sanctions were imposed on it, no campaign was launched against it, and no alliance was formed to stop its crimes, in spite of the fact that the crime is well-documented, and in graphic, horrendous detail,” Zawahiri says. “The reason for this hypocrisy is simple: The victims are Muslims.”

The video includes various images of Muslims recounting their oppression at the hands of Buddhist forces.

The narrator uses these examples to criticize the United Nations and other international institutions. “In spite of the horrendous nature of the genocide and racial cleansing of the Muslims of Rohingya, the ‘world community’ has remained silent, if not passively supportive of these crimes,” the narrator says. “The reason is simple: the victims are Muslims, not Christians, Buddhists or atheists – the occupants of the five permanent seats in the UN Security Council.” 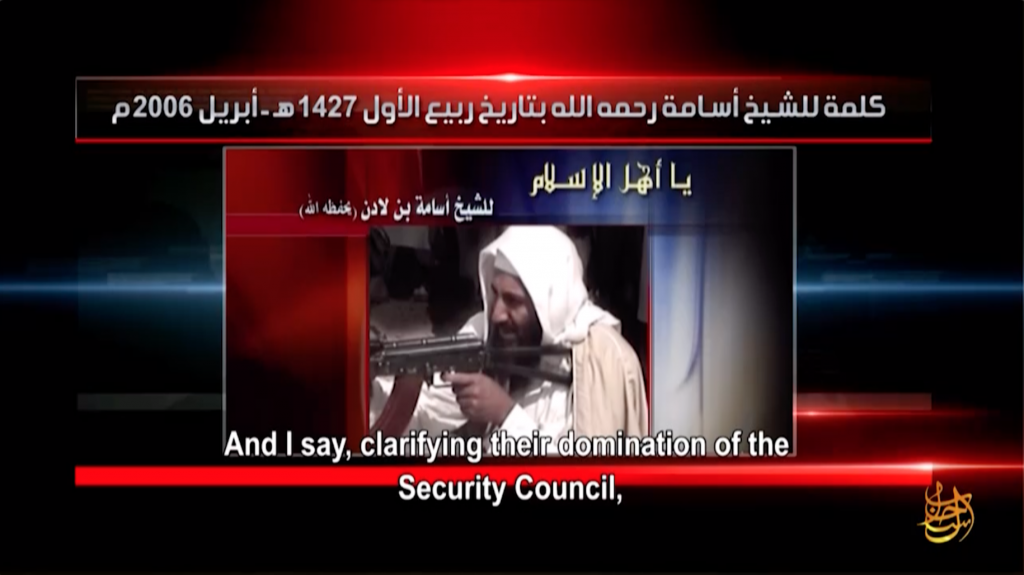 The al Qaeda founder, who was killed in May 2011, goes on to argue that Muslim-majority countries are underrepresented at the United Nations despite their large populations and control of significant territory. “The UN is an organization of unbelief, and he who is pleased with its laws is an unbeliever, and it is a tool used to implement the Zionist/Crusader resolution, including the declarations of war against us and the division and occupation of our land,” bin Laden says.

Zawahiri accuses Muslim countries of failing to come to the aid of the Rohingya as well. “Unfortunately, the response to these massacres by the governments in the Muslim World was no different from the Western response,” Zawahiri says. “And this should come as no surprise since these governments are essentially a Western creation, client regimes imposed on Muslims for the protection of Western interests.”

Zawahiri returns to this theme – accusing Muslim governments of serving the West – later. “Thus, I shall not waste my words on the petty criminals in Myanmar, nor on the bigger criminals in the Western World or for that matter, the client slavish regimes that have outlived their shelf life in the Muslim World,” Zawahiri says. “My message is for my Muslim brothers in Burma and for the Muslims the world over. To them I say: Beggars are not the choosers. This is the law of history.”

After citing the Quran, Zawahiri then calls on Muslims in Myanmar and elsewhere to strike the government. “Therefore, this criminal Buddhist government that has been pampered by the West shall not be deterred except by force and by making it pay the price of its aggression within and beyond Myanmar,” Zawahiri says. “This is a binding duty on the entire Ummah.”

Toward the end of the production, As Sahab’s narrator claims the “tragedy of our Rohingyan brothers and sisters is the same tragedy that has afflicted our people in Syria.” He then adds the conflict in Kashmir.

“As for the oppression faced by the Uyghur Muslims, the criminality of the Chinese government has crossed all limits,” the narrator says. As a tweet from China’s representatives is displayed on screen, he says: “Chinese diplomats in America have the audacity to say that this is something for which the world should be grateful to China!”

The narrator also connects the French military’s actions “in the Islamic Maghreb, specifically in Mali,” the American bombings in Afghanistan and the war in Somalia to events in Myanmar. He claims that all of these, and more, are among the “tragedies” affecting the Ummah, or worldwide community of Muslims.

Zawahiri returns at the end of the video to emphasize that the plight of Muslims in Myanmar is part of a global struggle.

“The wound of the Rohingyan Muslims is the wound of the Ummah in its entirety,” Zawahiri says. He then attempts to connect the situation in Myanmar to al Qaeda’s global jihad.

“Our enemies shall try to divide us,” Zawahiri explains. “They will say to the Egyptian: Your concern is Egypt alone. To the Maghreb they shall say: Your concern is the Maghreb alone and so forth to the Syrian, the Indian, the Chechen, the Philippine, the Somali and the rest.”

For Zawahiri, the situation in all of these countries is a concern for the jihadists. He criticizes the West and international institutions for maintaining lists of global terrorists. “And if you step over the boundaries that we have enclosed and imprisoned you in, you are an international terrorist,” Zawahiri says, when supposedly summarizing the international community’s response. “We [the U.N. and the West] shall put your name in the list of wanted terrorists, place sanctions on you and engage with you with bombs and missiles,” Zawahiri claims.

With an image of bin Laden displayed on screen, Zawahiri closes the video by again threatening Myanmar.

“This is the way forward: Striking the interests of Myanmar and the criminals of Myanmar wherever we are able to do so,” Zawahiri informs his followers.

One of the last images displayed on screen places various “martyrs,” including jihadist ideologues and al Qaeda figures, alongside historical figures, including Muslims who opposed various colonial powers. The image (seen below) is intended to portray al Qaeda’s agenda and program as part of a decades-long struggle against stronger foreign powers. 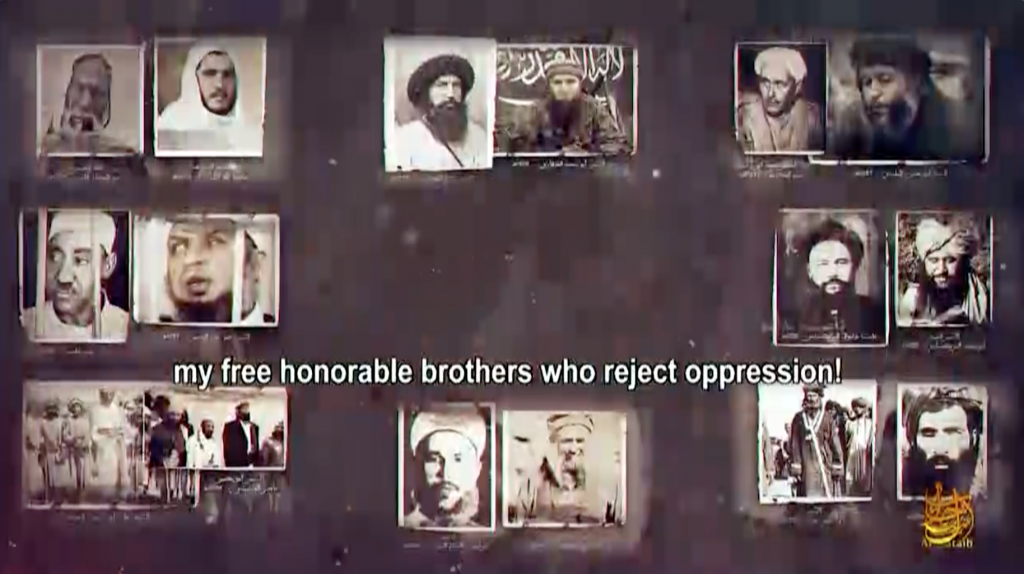