IAEA Inspections in Iran under the JCPOA

IAEA Inspections in Iran under the JCPOA

Bloomberg News reported a doubling of nuclear inspections in Iran following the implementation of the 2015 nuclear deal known as the Joint Comprehensive Plan of Action (JCPOA). Advocates of the JCPOA have interpreted this new statistic as evidence consistent with President Barack Obama’s statement that the agreement would entail “the most comprehensive and intrusive inspection and verification regime ever negotiated.” However, a closer examination of the new data suggests there may be aspects of the inspection program that have become less comprehensive and less intrusive since the implementation of the JCPOA.

The Bloomberg article is based on official reports from the International Atomic Energy Agency (IAEA) to its member states. During the first year of JCPOA implementation in 2016, the IAEA performed 402 inspections, as compared to 211 in 2013.

However, it is important to go beyond the simple tabulation of the number of inspections. For instance, we should look at the total number of work days on the ground that inspectors spent during visits to various sites and facilities. Here, the statistics reveal a different picture: Inspectors spent 689 work days conducting inspections in 2013, a figure that rose to 1,692 the next year and rose again to 2,170 in 2015, before falling to 1,042 last year after the implementation of the JCPOA. 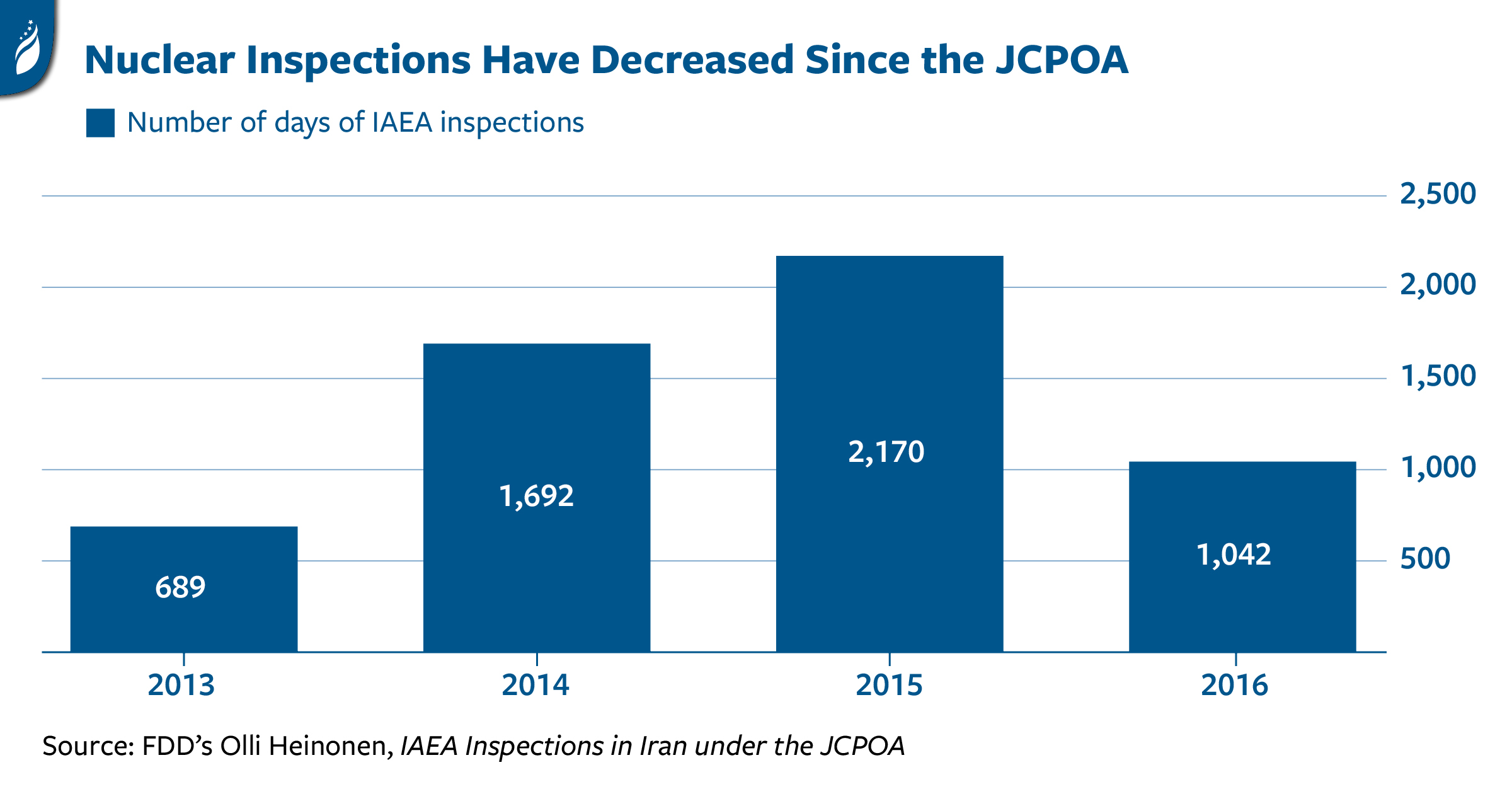 One should also be careful when comparing the level of inspections in Iran to the level of inspections in other countries. For example, IAEA monitors spent 751 work days inspecting Canadian nuclear facilities in 2016, a number significantly lower than the 1,042 work days spent on inspections in Iran. However, the IAEA has already drawn what is known as a “broader conclusion” assessing that Canada is in full compliance with its safeguards undertakings and that there are no indications of undeclared nuclear material and activities. This is not the case with Iran.

It is also important to consider that the IAEA carries out additional monitoring tasks in Iran, which go beyond normal safeguards verification activities and are thus not reflected in the statistics quoted by Bloomberg presented above. These tasks include monitoring the production of centrifuge rotors, uranium ore concentrate, and heavy water, as well as the use of large hot cells. Based on the IAEA quarterly reports cited by Bloomberg, it is far from clear if inspections are intrusively carried out as needed.

Finally, there are non-statistical indications that IAEA inspections may not be as intrusive as necessary. On background, an IAEA staff member disclosed to journalists that the agency has not conducted any visit or inspection at military sites in Iran since the implementation of the JCPOA. Yet without visiting military locations, it is not clear how the IAEA can monitor the implementation of Section T of the JCPOA, which proscribes the employment of dual-use equipment for nuclear weapons-related activities. In fact, the IAEA has not explicitly stated whether Iran has met its obligations under Sections D, E, S, and T of Annex I of the JCPOA. In the future, it will be important for the IAEA secretariat to submit more detailed reports.

The IAEA remains an important organization dedicated to preventing nuclear proliferation. Leveraging its inspectorate’s unique authority to access people, places, and facilities will be indispensable to the full and meaningful implementation of the JCPOA.

Dr. Olli Heinonen is a senior advisor on science and nonproliferation at the Foundation for Defense of Democracies. He is the former deputy director general of the International Atomic Energy Agency (IAEA) and head of its Department of Safeguards.