Russia has solidified its military and political control of the Crimean peninsula after deploying troops that had been stationed at Russian bases in Crimea and bringing in outside reinforcements.

Russia’s invasion of Crimea breaks multiple international agreements: the 1997 Ukraine –Russia Bilateral treaty, the 1975 Helsinki Final Act, article 2(4) of the U.N. Charter, and the 1994 Budapest memorandum which clearly reads, “The United States of America, the Russian Federation, and the United Kingdom of Great Britain and Northern Ireland, reaffirm their obligation to refrain from the threat or use of force against the territorial integrity or political independence of Ukraine, and that none of their weapons will ever be used against Ukraine except in self-defense or otherwise in accordance with the Charter of the United Nations.”

While Russia appears largely unconcerned with the consequences of violating these treaties, it is still vulnerable to Western economic pressure. This, however, is a double-edged sword, particularly for Europe.  The U.S. and Russia do nearly $40 billion in trade per year while the European Union and Russia do closer to $460 billion in trade per year. Russia is the third leading trade partner of the EU and the EU is the first trading partner of Russia. In other words, the EU-Russia trade relationship is one of the central reasons why the Europeans are unlikely to impose the sort of tough sanctions the U.S. is considering.

Russian natural gas, exported via state-owned Gazprom, is Russia’s best insurance against European economic pressure. Countries that would be most susceptible to Russian natural gas delivery disruption include: 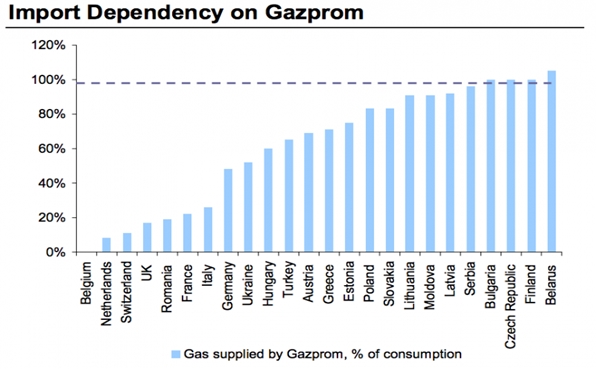 The challenge for the West now is to shore up the nervous Eastern European countries that only in the last decade joined the EU. To do so, the U.S. and NATO will need to project both economic and military power amidst a tough defense budgetary climate and ambivalence about Western intervention.