The Financial Action Task Force, or FATF, the international body for setting the global standards to combat terrorist financing, held its plenary session in Paris in mid-February 2014. In the days before the meeting, Bloomberg reported that the Turkish lira weakened and stocks dropped resulting from concerns over a possible blacklisting. Realistically, Turkey was in little danger of joining the short FATF list of countries requiring “counter-measures” (Iran and North Korea). But the markets were jittery because of an ongoing corruption scandal in Turkey, which erupted on December 17, 2013.

In the end, the corruption charges had no impact on FATF’s ruling. Ankara was merely grey-listed by FATF, as it has been since 2007, due to deficiencies based on technical and legislative criteria. But the market’s outsized anxiety underscored the fact that, amidst the corruption scandal, a troubling picture has come into focus. 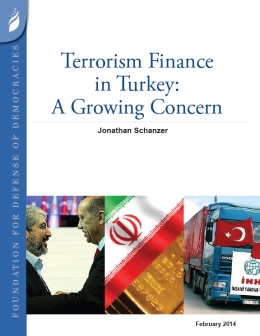 With the Syrian civil war raging just across Turkey’s eastern border, reports continue to circulate that Turkey has turned a blind eye to the flow of money and weaponry to dangerous jihadi groups, including al-Qaeda. And while Ankara has been struggling to weaken Syrian president Bashar al-Assad, a client of the Islamic Republic of Iran, Turkey was involved in a massive sanctions-busting scheme with Tehran. Now known as “gas-for-gold,” the scheme helped the Iranian regime gain some $13 billion, even as Turkey’s NATO allies sought to punish Tehran for its illicit nuclear program. Meanwhile, leaders of the Palestinian terrorist group Hamas have been meeting with Prime Minister Recep Tayyip Erdoğan in Ankara. In fact, one senior Hamas leader, Saleh Aruri, reportedly resides in Turkey, where he has been allegedly involved in the financing and logistics of Hamas operations. On top of this, in September 2013, Turkey surprised the West by entering into a controversial missile deal with a Chinese defense firm that was blacklisted for selling Iran items for its nuclear program.

Many of these reports intersect with the recent corruption scandal. The ruling Justice and Development Party (AKP) has rejected most of the allegations, blaming outsiders (notably Israel and followers of the Pennsylvania-based Islamist leader Fethullah Gülen) for a “treacherous plot.”[2] Rather than addressing the charges, the AKP has purged the investigators, prosecutors, and journalists involved, threatening the rule of law in Turkey. Washington, for its part, has remained on the sidelines, expressing relatively mild concern about the crackdowns on law enforcement officials and the jailing of journalists, while electing not to mention terrorism finance issues publicly.

Washington’s silence stems from fears of a fall-out with Turkey, which has been a crucial ally over the years, and is situated strategically at the intersection of Europe and the Middle East. But Turkey’s actions constitute a direct challenge to Washington’s sanctions regime. Built under two presidents, this layered and intricate sanctions infrastructure has become a crucial tool to combating illicit finance the world over. Moreover, with Iran, Hamas, and al-Qaeda in the picture, how long before elements within the U.S. government—whether the Treasury, State Department, or Congress—feel compelled to issue designations of individuals or institutions tied to terrorism in Turkey? How long before Turkey runs the risk of being viewed as a possible State Sponsor of Terrorism?

Such steps seem drastic. But should these problems continue to mount, Washington will have a more difficult time maintaining this important alliance, both because of legal obligations and public perceptions. The window to address these problems is now.